WILL THE CHIPS WILT

We find ourselves returning to Chippenham on the same weekend as last season, the weekend before Valentine’s day. Just like last season we are without Pharp, once again he’s away for a romantic weekend at Center Parcs, probably windsurfing. Pharp has asked the remaining PRATS to pay homage to one of his ancestors, a Saxon nobleman who went by the name of Ethelwynd the Unsavoury. Ethelwynd was famous for developing the scorched earth policy, especially when he was running away from his arch enemy the Viking eunuch Ivar the Boneless. Contrary to popular belief, Ivar’s helmet never had the horns.
Ethelwynd the Unsavoury’s boss was King Alfred who spent some time hanging around this part of Wessex, but he buggered off from Chippenham around 878AD when the Vikings besieged the town. Ethelwynd followed Alfred, most people preferred to have Ethelwynd behind them. A few months later Alfred and Ethelwynd kicked seven shades of Valhalla out of Guthrum and the Viking horde, forty miles down the road in the Battle of Ethandun. One day when Alfred was doing a bit of baking; Ethelwynd came into the kitchen, bent over to stoke the grate and the rest, as they say, is history. Why Alfred took the blame remains a mystery. Ethelwynd the Unsavoury was a literary giant in his time, credited with the epic manuscript the Anals of Anus Horrobilis. Many tales from this renowned verse were used in the classic mediaeval folk songbook the Backside of the Moon. Often performed by folk band Pink Haemorrhoid in the boozer they used to hang around in, the Bunch of Grapes. 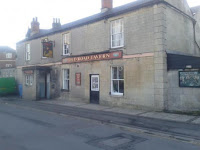 We won’t be going to the Grapes, instead we will make our way to the Three Crowns, we came here last season and an excellent boozer it is too, having won the NW Wilts CAMRA Pub of the Year 2016 & completed the double by winning the NW Wilts CAMRA Cider Pub of the Year 2016. The beer list looks interesting, we could be in for a good couple of hours. There a few decent pubs in the town with the Old Road Tavern probably the best for ales and within reasonable walking distance from the ground.
We are in for a tough game this season with Chippenham sitting on the top of the pile. They were doing quite well this time last season but completely folded going from the top end of the league to completely missing out on the play-offs. Will they do the same this season? Our record against the top teams has not been good so far, hopefully we can put that right.

On the way home, well we haven’t stopped off at the Towcester Mill brewery tap since he first day of the season, maybe it’s time to pop back in.