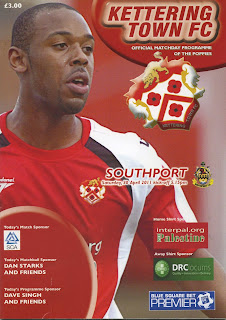 It was Saturday 30th April 2011, last match of the season. The Poppies had beaten Southport 3-1 with two late goals in the 87th and 90th minute, condemning the Sandgrounders to the drop on goal difference. We Poppies supporters were all in a party mood, a sumptuous end of season buffet in the sponsor’s lounge, pork pies, cheeses, pate’s, crusty bread with plenty of ale and loads of good friends thoroughly enjoying themselves. In the Tinhat the party was in full swing, end of season frivolities, ale fuelled supporters dancing on the tables, chairs and even on the bar itself, by 8:30pm we had drunk the bar dry. Southport went away downhearted; we were happy and they were sad. Little did we know that we had just played our last competitive match at Rockingham Rd, events were about to send the Poppies spiralling towards oblivion.

On Saturday June 11th 2011, Rushden and Diamonds were expelled from the Football Conference, Southport had been entered into the Conference league’s annual AGM cup and were favourites to lift the trophy and so they were reprieved. Poppies chairman Imraan Ladak spoke up for R&D at the AGM, proclaiming the events a travesty. Less than one week later, on Friday June 17th, many Poppies supporters gathered at Wicksteed Park to hear Imraan Ladak, with lapdog in tow, explain why Rockingham Rd was no longer a viable option and Rushden and Diamonds old home Nene Park was. Clearly many Poppies supporters considered all that glittered was gold, they succumbed to the sales pitch and voted to move the club from our ancestral home of Rockingham Rd to a shiny newish Lego palace 10 miles away.

Around the field where the Poppies bloomed
We stood together our hearts consumed
We’ve watched the reds throughout the years
We’ve laughed together, and cried some tears.

It strains our hearts and it strains our soul.
We stood together, complete and whole
But without the field where the Poppies bloomed
Will we stand together or will we be doomed

With pasture new, near backwater fen.

Will we settle once more, beside the Nene

Will we gather our hearts and gather our soul
Will we stand together, will we be whole

Almost 18 months later we were on the edge of the abyss. We entered into CVA, the Japanese investors never materialised, DCR Locum were now owned by some dragon named Caan, who wasn’t prepared to honour Ladak’s sponsorship deal. We are relegated to the Southern League with a 10 point deduction penalty. On 6th Oct 2012, our 10-man ‘mackled together’ team were bashed by Bashley, in our last match at Nene Park, also labelled our ‘last match ever’. The Southern League, allowed us to suspend our season for a month or so, without further penalty. A six-month Arctic sojourn on top of Rockingham Hill, courtesy of Corby FC, was concluded with a second consecutive relegation and a party in the clubhouse at Latimer Park. On 29th April, we were given a 56 day stay of execution against a HMRC winding up order, we had until the 24th June to sort things out.

We stand beneath the gathering gloom
Waiting for our impending doom
So many ships, crushed on to the rocks
For friends and companions, the grim reaper knocks.

The Poppies do wilt, no longer to bloom
Our hearts and souls it did consume
We stood together, but do so no more
Our broken soul, torn at the core. 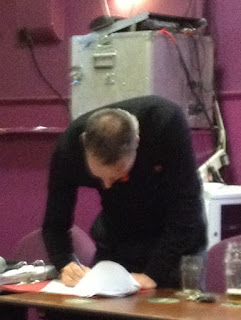 where Ritchie signed an agreement to play at Latimer Park. The landlords from Nene Park tried to scupper our future. Saturday 7th September we played yet another ‘last match ever’, winning 4-3, we were still clinging onto the lifeboat. Collectively, we met the challenge, we raised funds to assist Ritchie at the courts, 7th October our fears were allayed. The accursed Nene park was behind us.

Our beating heart will ne’er expire
Despite the foe that do conspire
We did not break, we did not sway.

Though many feared and stayed away

8 years later, things are brighter, a lot brighter, although we teetered on the edge, we did not succumb or plummet into the abyss. Life at Latimer Park has been good, 2 championship titles, a couple of county cups. A few play offs and a most joyous New Year’s Day 2019.

Each small step, a gentle stride

We walk together, side by side.

We built our home on this new field.

An arid square, a boggy weald.

Our visiting foe we seek to knobble.

Most succumb to the Burton bobble.

Inside a fence that bears our name.

Around the field to cheer the game.

We stand together our hearts consumed.

Around the field where the Poppies bloomed.

Kettering Town to play a 'home' league game at Corby

Light at the end of the tunnel for kettering

Poppies stare death in the face featuring our MP