‘THESE ARE THE GOOD OLD DAYS’

THESE ARE THE GOOD OLD DAYS
The big day is here, we’re going to the town where most of the locals have jowls hanging down below their chins. 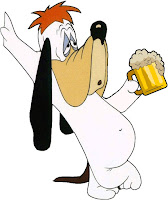 Think Droopy the bloodhound, it’s all the glass blowing that did it.
It was going to be a longish sort of day, not because we had a lot of travelling to do, but because we had quite a few brewery taps to take in, as well as a top of the league clash. Pharp was scooped up at 9:50am in Rushden. Pharp is a man of property in Rushden and on occasion visits his tenants. One time he was going around the house with his tenant, Simon Klopps, Si to his mates. He complimented Si on the wonderful gallery of his family ancestors that adorned the stairs. All of whom had done well in life and champions in their own field. However, Pharp was a little embarrassed when Si said it wasn’t the family ancestors but his prize-winning Jerusalem artichokes from the Rushden Horticultural annual show. Pharp was further embarrassed when he recalled previously commenting on the family likeness.  We were back in God’s chosen town to meet up with the PRATSmobile by 10:20am. 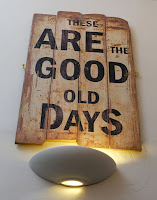 We arrived at the first hostelry at 11:45am. The Windsor Castle Lye, owned by Sadler’s Brewery. We were greeted by a long bar with about 10 handpumps all in a neat row. Where to start, Fuggles and Citra went for Peaky Blinders Pale Ale, 4.3% abv of lovely citrusy bitterness, very refreshing and didn’t last long. Pharp went for Peaky Blinder Black IPA, 4.4 abv, a dark richness, as Pharp would describe it ‘burnt stubble’ roasted flavour. The head clung to the glass for both ales and in very good condition. Parker settled for a coffee. There was a sign nailed to the wall, ‘THESE ARE THE GOOD OLD DAYS’ was this an omen? Time for another, Citra stayed with the PB pale ale, Fuggles went for half of Hop Bomb and half of Hop Hut, the latter is a very refreshing session pale ale at 3.6% abv. Once again citrussy easy drinking, probably a weaker version of the Peaky Blinder Pale Ale. The Hop Bomb 4.6% abv was a little sweeter, American Pale Ale, after the previous 2 ales it was difficult to pick up any real hoppy flavour, still it was refreshing. Time to move on to the next hostelry.
Just a couple of miles to Stourbridge town centre, we managed to get into Wilkos car park. Fuggles was out of the PRATSmobile like Insane Bolt springing forth from the blocks. Not unlike a gazelle he almost walked fast to the Duke William pub about 200 meters away, with Citra in hot pursuit. Gasping for a pint or was it oxygen, we entered the home of Craddock’s brewery. What a great pub the Duke William is, wish we could have one like it in Kettering. Unspoilt by time, full of locals, it was the dangling jowls that indicated the indigenous species. 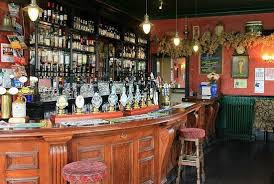 Behind the bar was a tall bloke wearing a Glassboys shirt, within a few Nano-seconds we were trading insults, much to the delight of the punters hanging on to the bar. We asked the bar manager what was his preference, he said he always enjoyed a Crazy Sheep frolicking around his tonsils. We said “we can see that but what about the ales?” More chortling echoed around the bar. Jason, the bar manager pointed to his preference and he pulled one, then another. Fuggles and Citra had gone for a Crazy Sheep, 4.5% abv of pale zesty loveliness. Dangerously easy to thrash down your neck, in excellent condition with the head clinging tightly to the glass. Pharp said he fancied Stout Goat Herder down his throat, nice, but in the end went for a Lion’s Pride, a good premium amber ale 4.5% abv, bitterness with bags of maltiness. With Faggots and mash on the menu it was inevitable that Citra and Pharp would order a couple of platefuls. Time for more beer, Fuggles and Citra went for a Saxon Gold, 4.0% abv, another pale ale for a good session. Some sweetness early on with a good bitter finish. All very nice, the faggots arrived and much to the delight of Fuggles and Parker it wasn’t with mushy peas. Pharp had already unleashed a couple thunder pants, mushy peas would have only fuelled the combustion chamber. We were happy Pharp less so, he’s not a ‘petit pois’ sort of person. By now there were quite a few Poppies supporters in the main bar and the ‘snug’, putting a few shillings into the local economy. Time to move on to the ground. It was about a 10-minute drive around the one-way system then join the queue. There was going to be a big crowd, our reserved parking space had already been re-allocated when we arrived at 2:15pm. Nevertheless, we managed to get parked up inside the ground.

The clubhouse was already heaving, with both sets of supporters mingling together. The War Memorial ground is 3-sided, with the cricket pavilion across the far side. A large covered terrace behind one goal and covered seating down the side. On open end on the clubhouse side behind the goal. It was pouring with rain as the players came out. The early exchanges were always going to be cautious, nobody wanted to make a mistake. A goalless first half, saw the Poppies hit with injuries and forced into a couple of changes. The Glassboys scored first much to the delight of the thousand or so home fans, but last gasp drama swung the result into the Poppies favour with the travelling horde going quite berserk.  The sign in the Windsor Castle sprung to mind ‘THESE ARE THE GOOD OLD DAYS’. One thousand seven hundred and thirty-four people had crammed into the War Memorial ground to watch a very entertaining game of non-league footy. Even the neutrals would surely have enjoyed the 90 minutes of pure drama that unfolded before them.
Time to celebrate at another brewery tap, but not before firstly bumping into the Duke William’s landlord Jason, who invited us back for more excellent ale, but we gracefully declined and instead went to the Badelynge Bar home of Green Duck Brewery. The Badelynge is on an industrial estate, if it wasn’t for the sign sitting outside on the path, you’d miss it first time round. From the outside it’s not much to look at but once through the door we enter the Tardis, a medium sized warehouse cum factory unit. 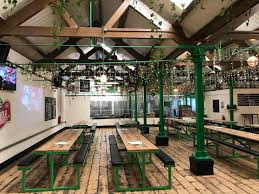 A dozen or so long bench seats greet us with the brewery at the far end. Then just around the corner tucked away with people milling around was a very small bar. To the right of the bar was the lounge, with its own sign pointing the way towards a corner with duck wallpaper and a few sofas, all very posh. The lounge sign was no doubt ‘tongue in cheek’. There were around 40 or 50 punters enjoying the ales, so we thought we’d join in as well. Fuggles initially went for Duck Blonde, but on sipping Pharp’s or was it Citra’s, Fuggles changed his mind and settled for Duck and Cover. The Blonde 4.2% abv didn’t really taste of much, a bit wishy washy. However, the Duck and Cover was altogether a different cup of tea. Delightful bitterness, pale ale coming in at 4.0% abv. A very easy drinking session ale. Just time for one more before we left for another pub on the way home. This time Fuggles went for Falconers Flight an America Pale ale, 4.8% abv, full of lemony grapefruit zipping across the taste buds, wonderful. Time for out journey home, it seemed to take ages to back onto the M6, so much so that our planned visit to the Red Lion Thorny was abandoned, instead, Fuggles and Citra got dropped off at the Alex In Kettering. Parker and Pharp, the youngsters amongst this band of lushes couldn’t hack the pace. We both started off on Elliswood brewery’s Just One More, oh the irony, a lovely 4.2% abv golden/amber ale with a citrussy zap. The were several Poppies supporters already back from Stourbridge, all excited, all getting pissed, ‘THESE ARE THE GOOD OLD DAYS’. Fuggles and Citra had another pint of something but neither of them can remember what they were. However, Fuggles clearly remembers going home on a pint of Thornbridge Jaipur IPA 5.7% abv of wonderfulness. Probably one of the best ales around. Marvellous.

That was it, Mrs Fuggles has arrived time to go home. A little unsteady on the feet, but a great day out and a hangover in the morning. ‘THESE ARE THE GOOD OLD DAYS’.