A nice leisurely trip to Stratford with an 11:00am departure arriving by 12:30pm after crawling through some roadworks. Slowly driving round the outskirts of Coventry brings some solace, at least we’re not driving through it. Travelling today we have myself Fuggles, Citra and Parker, with mini parker and her crutches otherwise known as Hoppy. This is our last Pharpless journey for a while, so we need to take in the country air whilst we can. Citra was leering out of the window hoping to get a glimpse of Anne Hathaway. Stratford is a lovely place with loads of tourists, river boats, open top ‘hop on-hop off’ buses; there was one especially for the Japanese tourists that was a ‘nip on-nip off’ bus.
When I think of the Bard, I am often reminded of that world renowned thespian Chief Mangosuthu Buthelezi doing a bit of Shakespeare in the film Zulu.

“Follow your spirit; and, upon this charge
Cry 'God for Dinuzulu kaCetshwayo! Mthethwa Paramountcy and umuntu ongcwele Shaka, stick that up your men of Harlech”. Marvellous stuff.
Everywhere you look there are references to Shakespeare, even Francis Bacon gets the occasional mention, especially on the breakfast menus. Listening to Parker and Citra discussing literary giants, Citra said he’d like to know more about Dickens, when asked what he knew already he said “not much I’ve never been to one”.
We headed for an NCP carpark to be greeted by a car reversing out of the payment barrier, several expletives later we managed to get to the payment kiosk ourselves, several expletives later we were also reversing. £3.00 an hour is extracting the urine, so we popped across the road and paid 80p. 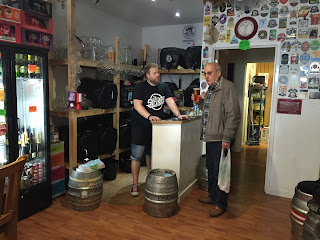 We strolled to the Stratford Alehouse. Alehouses seem to be popping up all over the place now, basically an ex-shop with some tables and chairs and more importantly wooden racks with several rows of barrels wearing insulation jackets. All ales serve by gravity; wonderful. There were a couple of groups of lads in there when we arrived, they looked as though they were on an England rugby and footy bender; could be a good day for them if this pub is anything to go by. Citra and I went for the Froth Blowers Brewery ‘Gollop With Zest’ a delightful blonde citrusy ale coming in at 4.5%, a loose head clinging to the glass. Parker went for Stratford Brewery Stratford Gold, a golden ale with a malty flavour 3.8%. A very slight haze, as advised by the very knowledgeable barmen before purchase, the ale was only tapped on Saturday morning. We followed up with Ticketybrew Jasmine Green Tea, this ale was in pristine condition, absolutely clear with a tight head clinging to the glass, for a gravity served ale this was astoundingly good quality, delightfully fresh tasting pale ale at 3.8%. The ‘Poppies’ return to Stratford in a couple of months for the Red Insure cup, we hadn’t planned on attending that game, however, this pub may well have changed our minds, well worth a visit.
We moved onto The Bear, a pub sitting on the bank of the River Avon, adjacent to the Swan’s Nest hotel. A very expensive smart bar with a nice row of 8 hand-pumps. Citra and I went for Joules Blonde, an ale we will no doubt be supping next week at Market Drayton. This ale is brewed with lager malt and Czech hops, it should be served colder than usual ales, this wasn’t, so probably not being consumed at its very best; nevertheless, it was a decent pint. Fresh tasting at 3.8%, slightly hoppy finish. The price was eye watering, 2 ales, J2O and half of Coke £11.45, ouch. A nice place to bring the better half. One was enough for the wallet so we moved onto the ground and went for a cup of tea. We didn’t go into the club house so sadly we haven’t got a clue if they had any decent ales available, I’m sure some fellow Poppies supporters will enlighten us. The game, once again we played well punctuated by silly errors, another defeat damn and blast.
We left the ground a tad mardy and went to one of our favourite brewery taps the Woodfarm Brewery near Lutterworth. http://www.woodfarmbrewery.co.uk/index.html 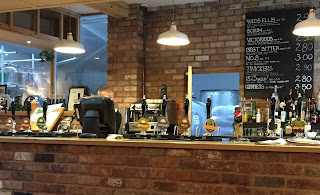 Eight ales on hand pump all brewed on the premises plus two ciders also hand drawn. Most of the ales have a Rugby theme to their names, Scrum, Webb Ellis, Union, Twickers, Grand Slam, you get the picture, very much a Leicester Tigers affiliated bar, with signed shirts and photos adorning the walls. Behind the bar, through the window the mash tuns of the brewery can be seen. Citra and I started where we usually start with Best Bitter, a lovely golden ale at 4.2%, and hoppy aroma with a bitter finish. In good condition, good head clinging to the glass.  Parker went for Victorious, once again his usual, a dark amber ale with a malty aroma and mellow bitter finish. I followed up with No8 a 5.0% Amber ale, lovely full bodied, hoppy aroma with a malty finish, always in good nick. Citra went for Webb Ellis, a good hoppy session ale at 3.8% with a dry finish. To close the day out we had one more pint, both Citra and myself going for Twickers, 3.7%, golden, citrusy, lovely. One of the highlights of a visit to Woodfarm is the pork pies, 4 varieties available, standard, pork and stilton, pork and black pudding and ploughmans. These pies are knocked out by Sercombes of Rugby, although not part of the Melton Mowbray pie association these are delightful pies. http://www.sercombes.co.uk/products.aspx
That was it for one day, shorter than our previous Saturday outings, good to get home early and getting planning for our FA cup encounter next week up in Market Drayton.