Paulton Rovers Ale Tasting Session
Another long trip, the PRATS have already done 1011 miles after just 5 weeks into this season, only another 3550 to go, plus any cup games that may come along. Paulton Rovers another new opposition for the Poppies. Paulton set in the former Somerset coal field. Now when you think of coal mining, what images and sounds do you conjure up; flat caps, whippets and “by eck” or maybe, daffodils, leeks and “yaki dah”? Certainly not a smock with 3 crosses on it or flagons of cider, “ooh arr”. As we say in Ketrin “it dawn’t cumpoot”. Probably more to do with our naivety, apparently the worse you are at coal mining the more coal you dig out, the more faults the better.
Which way to go down to Somerset for the second time in three weeks is the big question? There shouldn’t be any holiday traffic, there, that’s put the kybosh on it now. Probably get caught up in a monster jam on the M5 and have to listen to a stringed quartet jam session.

There is a temptation to take the M5 and go via the Crown at Churchill. Lovely old pub, unchanged for decades, 8 ales served by gravity, sounds good. The pub hasn't changed since 1984, very old fashioned, toilets outside across the yard. Very popular with walkers and cyclists so can get busy quite early, that’s our travel route sorted.
There are one or two pubs in Paulton, the Lamb and the Red Lion both serve real ales. Both of these within easy walking distance from the football ground. The clubhouse looks as though it has plenty of sport on the many tellies, not sure if they have any ale on tap. 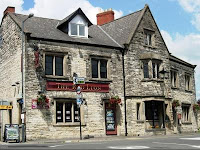 Butcombe, Courage and maybe Bath Ales can be found around this part of the world, with a bit of luck we may find some ales up from Cheddar brewery as well. Not too far away is the RCH brewery so a Pitchfork might be on tap somewhere. No doubt bloody Doombar will also put in an appearance somewhere. 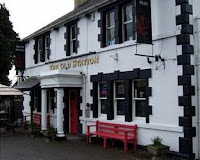 Further afield towards the west you’ll find a Butcombe pub the Ring'O'bells at Compton Martin, we may well come this way from Churchill. There is also the Old Station and Carriage, only about a mile or so away in Hallatrow, looks a pleasant pub.
On the way home we could go back the way we came up the M5 and along the M42 and call in at the Coach & Horses Inn at Weatheroak, a great pub and home of the Weatheroak Hill brewery. Or maybe take the Bath, Swindon, Oxford route. We have several temptations on the way; however, our favourite brewery tap Towcester Mill is holding a beer festival. Closer to home the Red Lion Broughton is also having one, even closer to home the Three Cocks Kettering is holding their third of four festivals this year, all coinciding with the Solstices and Equinoxes, decisions, decisions.


Good to hear the Tunbridge Wells Ale Tasting Society has been formed; however, they are still struggling for a name as the acronym doesn’t really work.