It’s Boxing Day, probably one of the best footy days in the footy calendar. Always loads of away day supporters, all usually in good spirits after being overwhelmed by the previous day’s over indulgence. It’s nice to get away from the chaos and get a bit if fresh air and maybe a pint or three. As with most Boxing days games they are local derby’s: for the PRATS we travel to King’s Lynn the most Northerly team in the Southern League, just 90 minutes away. It was around 11:00 when Parker and Citra made their way to Rushden to scoop up Pharp and by 12:15 Fuggles had joined the merry troupe on the outskirts of Posh town. 45 minutes later we were parked up in the puddle ridden car park at the Walks and making our way to the Live and Let Live pub. 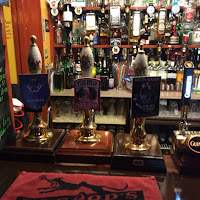 What a delightful hostelry, two/three rooms, one a small bar with two adjoining rooms the other an even smaller lounge. The landlady was only too pleased to offer us tasters of the 5 ales available. There was couple from Elgoods, the mild Black Dog and one of their Xmas ales Reinbeer, Moongazer’s Winter Porter, Tydd Steam Yooligan and Wolf’s Edith Cavell. Pharp had the Black Dog, we used have this on pressure at Latimer Park but it was never as good as this on hand-pump. One of the tastier mild’s about, this was beautifully clear, dark with a very tight head with strength of 3.6%. Citra, Parker and  Fuggles went for Wolf’s Edith Cavell, not the sort of ale Parker would usually drink but certainly up Citra and Fuggles street, pale, hoppy, citrusy, lovely at 3.7%, once again in excellent condition. It’s clear the ales at the ‘Live and Let Live’ are well looked after. By now the Weebles had arrived plus a few others closely followed by supporters off the coach, the lounge was now heaving with the Poppies travelling horde.
There was a scary moment when Pharp raised his right buttock, fortunately he was only adjusting himself to cross his legs, needless to say there was a sigh of relief throughout the tightly gathered throng. Next up Pharp had Tydd Steam Yooligan, obviously a seasonal ale with an image of a demonic looking Santa on the pump clip drawing on a glowing fag. At 4.5% this dark ale has a spicy sweet finish, quite hoppy and in good nick, maybe even Saint Nick! Citra and Fuggles went equally festive with Reinbeer, dark and rich with an almost whiskey like finish, a creamy coloured head clinging down to the bottom of the glass and a warming 5.0% that was going to keep out the winter chill if there was any. Some Poppies supporters had now returned to the ground to be replaced by a few Linnets supporters. All very friendly and chatty, naturally we wished them all a merry Christmas and a crappy afternoon. It was time to stroll to the Walks and within 5 minutes we were there.

The Walks is a very good set up, probably deserving of a higher league. Ex Poppy, King’s Lynn born Gary Setchell is still in charge, he’s been here a few seasons now; in fact he may have been with the Linnets since they re-formed back in 2010. Seems incredible this ground was entertaining UCL footy back then. Did I say the ground is owned by the local council, novel? They also contributed, along with the chairman considerable sums of funds to get it up to the current standard.
The game, well we dived a couple of time, once in the box, much to the aghast of Poppies supporters and considerable jeering and hissing from the Linnets. We scored 3 times, they didn’t score at all. We are starting to look strong now, mustn’t get too optimistic though, not yet. But since a Little Bideford tear let us down, we’ve picked up 13 points from 6 games. When will we play again, who knows? The Rains of Ranchipur are due this week, the chances are slim. Nothing like up North though so I suppose we should consider ourselves fortunate.
Time to go home but not before we stop off in Posh town for a swift couple, we arrived at the Oakham Brewery tap at around 5:50 and to our astonishment it was shut, not even a Christmas light flickering on a tree, disaster of disasters, Citra was going into melt down. Quick thinking and before we knew it we were on our way to the tap’s sister pub on a barge Charters.

Thankfully it was open, and absolutely buzzing with Posh supporters. A large chalk board listed all the ales available along with half a dozen ciders and a few craft beers. There were 4 Oakham ales, JHB, Citra, Inferno and Bishops Farewell, plus Tydd Steam Golden Kiwi, Grainstore Red Kite, plus a couple more which escape our memories. No need to say what Citra had to drink, Pharp had a Red Kite, a deep red coloured mild style ale coming in at 3.8%. Fuggles went for Golden Kiwi, as the name suggests is made from New Zealand hops, 4 types in fact, which give this straw coloured ale it’s very citrusy flavour, very refreshing and in superb condition as was Citra and Red Kite, Kiwi has a strength of 4.1% and can easily compete with the Oakham pale bitters in the grapefruit hoppiness stakes. Parker was on Pepsi that was nice and clear and very very fizzy, but had no head. A dark pop coming in at bugger all % with a sweetish finish. Parker didn’t look impressed, just sober. We had a little chat with a few Posh fans who immediately went into a tirade of abuse towards the football club formerly known as R&D, If you think I’m typing the names you’re very much mistaken. They were going on about one of the later owners destroying football. We just nodded and went for another ale, Pharp stayed with Red Kite whilst Citra and I went for a favourite of Fuggles Bishop’s Farewell, winner of more awards than you can ‘shake a stick at’. Not quite sure why you would want to ‘shake a stick at’ it but there you go. Perhaps if I went to the foot of our stairs it might make a bit more sense.  Bishop’s is a wonderful premium ale, pale coloured coming in at 4.6%. Hoppy, fruity, bitter, sweet with a dry finish, lovely, could sup this all night given the chance. I’m not sure how Oakham do it but their ales always look incredibly clear, no matter where you buy it, absolutely pristine.

Much to everyone’s astonishment they rang last orders at 6:30pm. There was a collective “whaaattttt” from all in the bar. A minor flurry of activity, but sadly not for us, we already had full glasses, so we drank up and were on our way home by 6:50pm.
Well that’s all the footy in 2015, quite good really, won a league, added a load more goals to our FA cup tally, I don’t think Aston Villa will close the gap this season. We are within touching distance of the play offs, and we had some fantastic pissy-arsey days out watching the Mighty Reds. Happy New Year from the PRATS.


Looking forward to our next away day down to Slough (Beaconsfield) and visiting The White Horse at Hedgerley. Marvellous.