It’s a 10:00am start for the PRATS, we are without Pharp today. He’s at Center Parcs enjoying the Jacuzzi. A cold day today, one of those days where one gives due consideration to the wellbeing of the family crown jewels. Thermal gonad huggers, thermal vest and so on. It’s also the 13th February the day before the accursed Valentine’s Day, the day where the blokes don’t really give a toss about but the better halves do. So the fellas have to focus for a minute or two: otherwise the wrath of the banshee will be brought forth upon us. But what is this Valentine day malarkey all about they are heavily biased in the direction of the more delicate half of our species. It’s important to get a card with a couple of teddy bears having a cuddle, with the daddy bear handing a bunch of flowers to Mummy bear. You now even get cuddly hedgehogs, when was the last time you saw a bloody cuddly hedgehog for goodness sake. Be careful with this, it could be deemed as symbolic, your little precious may regard this as describing her as a prickly customer. Loads of heart shaped boxes of chocolates, single red roses and so on. When was the last time you saw a heart shaped pork pie? If you did see one it wouldn’t be a message of affection it would be a bloody health warning. Can you imagine getting an extra-large sausage roll as a Valentines gift, with a lovely little message ‘To my lovely sage and onion sausagy wausagy from your ever loving snuggly pastry case’ maybe not!
We have a tough game down in Chippenham; we are not overly optimistic and fully expect them to complete the Barney Rubble over us. They’ve been banging the goals in lately.
It was a longer drive down than expected with the road works at Brackley. It was quite noticeable that the more southerly we travelled the wetter the weather became, drizzle turning to rain, grey skies, would the game be on, were we doing a Sluff? 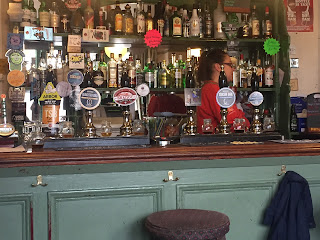 We arrived at the first watering hole of the day at around 12:30pm, as we pulled up outside the Three Crowns; it wasn’t certain from the outside that it was actually open, a pile of rubble in the adjacent parking area suggested some building work was going on within.  However once inside we were greeted by a nice row of hand-pumps and a friendly bar person wearing her welsh top in readiness for the rugger on the telly. Six hand-pumps with one sporting 2 pump clips implied 7 ales available. Citra and Fuggles went for Arbor Ales Triple Hop; the sparkler was as tight as possible so the ale came out with a very large creamy head, which clung to the glass all the way to the bottom. The ale was a tad hazy but tasted fine, refreshing blonde session ale coming in at 4%. Parker settled for a coke. Despite an enormous pile of logs in the fire place, they weren’t ablaze so the place was cold, but we persevered for another pint, this time we went for Gloucester Gold, sadly it went off as our ales were being poured so instead we had Branscombe Vale Brewery’s Branoc. This was in good condition with what seems to the house norm a very tight creamy head. Amber coloured, slightly sweet yet some bitterness at the end, very drinkable at 3.8%. We also indulged in the Walter Rose awarding winning pork pies, a bit disappointing to be honest, very little pepper in the tightly packed pink meat wrapped in a rather pappy pastry, sorry Walter not for us. By now the Weebles had arrived, Marshall, Betweenthesticks, Petit Chemise had returned from Norway and Cardiac was ticking along nicely.  It was a nice enough pub with a decent selection of ales, Corvedale Brewery’s Dark & Delicious, Gloucester Brewery’s Dockside Dark and Celt Experience Brewery’s Horse Cranium.  Reasonably cosy inside with several oval extended dining table surround by comfy seating fitted into the bay windows. All in all a decent pub.

We left the Weebles and moved onto the next pub this time we went to the Old Road Tavern From the outside it looks a bit of a Forest Gump, once inside, a fairly simple pub, simple décor, a bit of a 70’s throwback perhaps. Still 6 hand-pumps so onto the ales. The bar was split over two rooms, 3 hand-pumps in each room. Citra and I kicked off with Wye Valley Brewery’s HPA (Hereford Pale Ale). Another pale session ale, quite refreshing easy drinking with some bitterness at 4%, it was in good condition. Parker decided to have a drink this time round and went for Baths Ales Gem bitter, chestnut brown colour, very typical beer for Parker, just up his street, 4.1% bitter and sweet with a toffee aroma. Next up for Citra and Fuggles was the wonderful Hopback Brewery’s Summer Lightning, 5% of straw coloured tasty refreshing hoppy bitterness, as soon as it hits your tonsils you know its Summer Lightning, what a beauty this is. Could easily sup this all day, but we’d get inebriated very quickly. Flopper arrived with his better half, we only seem to meet her in pubs, we nod and say hello. Don’t even think we know her name. Flopper was wearing his walking boots, a good thrashing with some cherry blossom wouldn’t go amiss Flopper. You should be able to see you face in them; the only face we could make out was the south face of the Eiger. The other ales available were Otter Bitter, Black Sheep’s Golden Sheep and Gales Ales HSB, Pharp would be disappointed to miss out on this one. Time to move onto the ground, a pleasant set up with covered terracing on two sides and a main stand, but with restricted parking opportunities.

The game, well despite expecting to get well humped we actually won, an early goal, some decent footy at time from the Poppies. A Bluebird got his marching orders for swinging a boot; completely unnecessarily which inevitably made Chippenham’s task a bit harder. Nevertheless the ten men dominated the second half, but we held out scoring a second just before the end of full time. Flipper was no doubt performing double somersaults just off the coast of Brownsea Island; generally extracting the urine from a flock of Bluebirds on their way back from bombarding the white cliffs of Dover. A good turn out from the Poppies faithful, swelling the crowd to Chippenham’s best of the season so far; 527, well done chaps, time to go home. 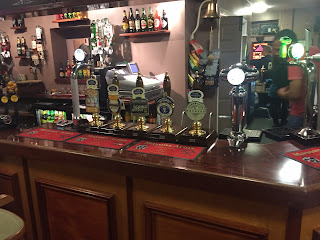 We were heading for Headington, the Masons Arms home of the Old Bog brewery, marvellous we were looking forward to trying some new beers. When we arrived at just after 6:30pm the Weebles had already taken root, off to the bar, and what a disappointment, no Old Bog beers available. That’s twice now in the last three trips we diverted to a brewpub only to be let down. Firstly on the road to Weymouth the Royal Standard at Upwey had no DT ales and now the Masons have no Old Bog. Nevertheless, five hand-pumps served some decent ale. Citra and Fuggles went for one of our favourites Dark Star Hophead. Refreshing pale, 3.8% easy drinking, another one we could thrash down all day but his time not so inebriated, it was in excellent condition, so much so that Citra had a second whilst Fuggles had a pint of Vale Brewery’s Two Cities, it was pleasant enough, it reminded me of something else but couldn’t quite put my finger on it. This is supposed to be fusion of English malt and French hops, is that the same as frogs? That was it for the day time to go home to our loved ones in the hope that we’ve got the Valentines stuff all sorted. For the Fuggles it’s also a wedding anniversary, 35 years, I know, even Jack the Ripper didn’t get that long. 35 years is the Coral anniversary, I got my dearest a betting slip from the local bookie, thanks Joe.