A PANE IN THE GLASS

It’s 11:30am and the PRATS are still in God’s chosen town, so short is our journey today that we were in the Red Lion Histon by 12:20pm. And we were very thankful for the short journey time as Pharp was at his most volatile, the PRATSmobile's windows were up and down more times than a kangaroo on a pogo-stick. You could clearly see in the rear view mirror motorists swerving left and right to avoid the pungent purple haze heading their way. We didn’t talk much on the way there, preferring to keep our mouths firmly shut. We were optimistic of a result today after a very impressive performance last Tuesday. Although recent history so far this season suggested we were due for a mare, after all we were playing against a team languishing in the nether regions of the league. We don’t generally beat these teams. 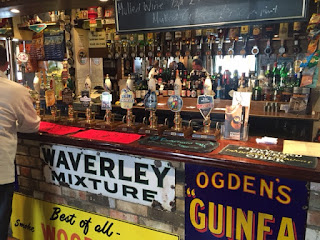 The Red Lion is a largish two room pub, the landlord is an avid Mariners supporters, even the chimney stacks are painted black and white, but also a nod towards the local team with a bit of red thrown in for good measure. Several Poppies supporters were already in the bar, Fleco Jnr and Snr had just downed a mighty fry up. We got to the bar just in time for McGinty’s Goat to get the beers in, good timing PRATS. McGinty’s Goat doesn’t even drink proper ale, much preferring the fizzy stuff, but today an ale was duly supped inducing frequent grimaces from his fizzog. It was Tring Brewery’s Side Pocket that was causing him such grief, it looked in good knick though, golden, citrusy coming in at 3.6%. Fuggles and Citra started with Oakham Ales Scarlet Macaw, a typical Oakham ale, very hoppy but not as citrusy as most of their stuff. Amber coloured ale coming in at 4.4%. It was served in excellent condition; beautifully clear with a good head. Parker and Pharp opened their account with Lacons Falcon Ale, a lovely auburn coloured ale which won Gold award in the best bitter class at the 2014 Peterborough Beer Festival. Once again the ale is in very good condition coming in at 4.2% so good Pharp stayed on this all lunchtime. Next up for Citra and Fuggles was Butcombe Haka, we had this on our Paulton trip, it’s too nice to ignore so we had to have one. New Zealand hops contribute to the citrusy bitterness. 4.5% blonde ale, and as with every ale consumed so far it was in excellent condition, very nice. Staying with the rugger theme next up for Fuggles and Citra was Batemans Hooker, another golden ale coming in at 4.5%. Quite hoppy with a fresh citrusy finish. So far all the beers todays have been perfectly clear, with a good well-presented tight head. Looks like we’re in for a session, next up is Batemans Gold. This is a very fresh tasting blonde ale, we had this on the St Neots trip, 3.9% easy drinking with a dry finish.
The couple at the table next to us were enjoying a huge plateful of decent looking snaffle, two delicious looking sausages, bacon, mushrooms and a couple of eggs plus a mountain of crispy golden chips, lovely. Unfortunately the young lady couldn’t quite manage the second sausage. McGinty’s Goat came to the rescue and woofed it down in one quick gulp. Pharp reassured the young lady saying that he wasn’t likely to offer his sausage in return, she didn’t look too disappointed. One more beer before going to the game so we opted for Tring Side Pocket, McGinty’s glowing report had convinced us to sample it. Very nice, we could understand why he struggled to appreciate the ale, far too much flavour for a fizz guzzler. So onto the Glassworld Stadium, on arrival we were greeted with sad news, Alan ‘Dapper Woggle’ Doyle had been rushed into hospital. Alan will naturally be disappointed having arranged to have all his mates at the game. Get well soon Dapper. Glassworld is a nice compact stadium, with covered terracing around 3 sides and a good mainstand.

The game, well what can I say, our optimism was looking well founded, we were on top for the first 20 minutes, then we conceded a goal. Sloppy defending, followed by sloppy attacking, then continued with sloppy defending, with sloppier attacking yet again contrived to see us lose to a poor side, a poor side that ran their socks off and worked hard. The two young lads that came on needed their nappies changing a couple of times especially when one of them scored the second and third goals. Our dreams of making the play-offs are yet again shattered. The PRATS have been to 18 away league games so far this season we’ve lost 10 of them, not counting the long trip to Bamber Bridge. It’s a good job we make a decent day of it by enjoying a few pints of good ale, just 5 more away days to endure this season. 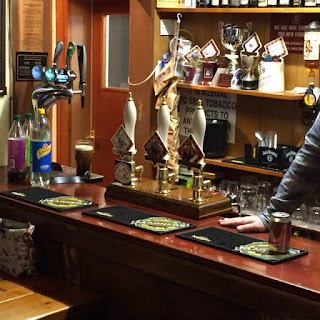 Time to start the journey home and just 20 or so minutes later we arrived at the Chequers in Little Gransden, home of the ‘Son of Sid’ brewery. A small pub with a couple of rooms, the rugger was on the telly, on the bar was 3 hand-pumps all serving home brews, Brown Showers, Golden Showers 'which as you can imagine brought a few crude comments from Pharp' and English Ale. Pharp went for Brown Showers, which was amber coloured, 3.9% and a bit boring to be honest although in superb condition and perfectly clear. Citra and Fuggles went for Golden Showers, which was slightly less amber than the Brown. 3.9% and a bit boring, once again in good nick. Parker settled for the English ale, 3.7% errrrr amber ale and yes you’ve guess it, a bit boring. If all three beers were lined up you would have a job to tell which was which. One pint each was enough, time to move on. We won’t be getting any of their ales for our beer festival and at £3.75 a pint for a beer brewed at the back of the pub, it’s a bit steep to say the least. Sorry Sid won’t be back, very poor value for money. 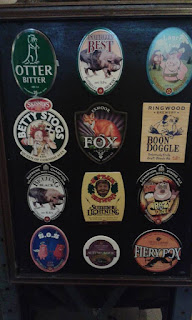 It was around 6:30pm when we arrived at the Fox Inn Thrapston, Thrappo to the locals, we sent a text to Sphericals who had purchased a couple of pies from the local farmers market. We would meet him in the Fox to help him woof down the pies. There was a mini-beer festival going on, where to start. It was Ringwood’s Boondoggle for Citra and Fuggles, a lovely blonde ale at 4.2%, citrusy yet slightly sweet. Drawn straight from the barrel it was in very good condition, very refreshing. Pharp tried Potbelly Best, brewed in Kettering so a reasonably well known ale. Chestnut coloured ale at 3.8%, this is more in keeping with Pharp’s preferred choice of ale. Parker settled for Otter bitter, a 3.6% session ale easy drinking, a few hops with a bit of malt, fairly well balanced pint. Next up for Citra and Fuggles was the ever delightful Hopback Summer Lightning; we had this a few weeks back in Chippenham. Spherical arrived baring ‘snaffle of the pie’ kind, two game pies, a bit of rabbit, a bit of venison, a dash of chicken and a couple of road kills to make up filling, you can’t beat hedgehog and badger with sprinkling of gravel and buck shot. Nice crusty pastry, although it may have been a wedge of tarmac. But without any jelly they were a bit on the dry side, so we had another pint to help wash them down. Another Lightning, at 5.0% we were starting to get slightly sozzled, just time for a final pint, this time the delightful Skinners Betty Stogs. A lovely ale copper coloured at 4.0%, very easily quaffable. We’d had our share of ale for the day, perhaps a few pints more that we should have done; nevertheless we needed to wash away the disappointment of the footy, very sloppy.


Next up Sluff again, hopefully we’ll get a game this time.