THE SUMMER OF DISCONTENT

It’s just 15 weeks since we last kicked a ball in Southern League anger, but in those 15 weeks there’s been an awful lot of things going on. We’re out of the EU, we have a new prime minister, Boris is now abseiling down the Eiffel tower waving a Union Jack singing ‘boiled beef and carrots, boiled beef and carrots’. He’ll be asking Angela Merkel how many different colours of that bloody jacket does she have in her wardrobe for goodness sake. The English got knocked out of Euro 16 by a Farmfoods Select XI, the Welsh are still singing, the Irish are still getting pissed and the Scots are still revolting. Once again the Poppies start their season down in Dorset, the third time in four seasons. More sodding holiday traffic to encounter and for the sixth season in a row we finish the season away from home. The last time we played our final league game of the season at home was our final competitive game at Rockingham Rd against Southport on 30th April 2011. Little did we know what a perilous journey we were about to embark upon when the final whistle sounded. We all got bladdered in the Tinhat, drank the place dry, not realising it was the end of an era and the beginning of Armageddon. Still, we Poppies are made of stern stuff, we are about to start a new season full of optimism. Our playing staff are mostly the same group that ended last season, so we have a stable squad. Our early fixtures are tough, so if we come out of the first 7 games with double digits in the points column we’ll be reasonably satisfied.


So 15 weeks after we travelled down to Dorchester to finish the last season off we are back down there to kick off this one. An early start, around 8:00am we’ll be getting on board the new snazzy PRATSmobile, a fine sporty, sleek machine, befitting the svelte-like passengers snuggly fitting into the bucket seats. Parker has full control of the ventilation system, which is an added bonus. This time around we won’t be frequenting the Little Chef for our Olympic breakfast, we will be going onto the Apache cafe which is located at the Army Flying museum near a place named Middle Wallop. Whilst the ‘Victor Ludorum’ sustaining fry up might appear to be the main motive for stopping here, there is another, introducing the Pharp Easy Breathe. This piece of apparatus has been used in many hazardous combat environments, we the PRATS have volunteered to put it through its toughest challenge yet. Citra, who sits closest to Pharp on our journeys will be the Guinea pig. We are hoping that Citra can retain consciousness for those vital extra 15 nano-seconds and thus warn those in the front seats of the impending threat. On previous trips, Citra has only managed to splurt out “you dirty ba” before succumbing, accompanied by a retching cum gasping cum gargling noise, tailing off to a wheezing sort of silence. We may now get the full sentence, if not somewhat muffled. 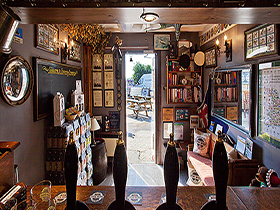 We very much enjoyed our visit to the Wayland Sixpenny brewery last April, so we’re going back. Although we must be on our guard not to mention certain ales or let our mobiles ring. We had paid out £4.00 in fines before we’d ordered our ales last time. After that we’ll mosey on down to Dorchester and most likely visit the Tom Browns pub. For those on the travel coach, a 10 to 15-minute walk towards the town centre and you will arrive at the Brewhouse and Kitchen, well worth the effort.


Hopefully we can get the same result as last April a 4-1 win would be a very nice way to start the season.


On the way home, I suspect the Towcester Mill brewery may well get a visit.