It’s here, the first day of a new footy season; and as seems to be the norm in recent years we are travelling down to Dorset. Whilst there is much excited anticipation, there is an edge of nervous tension in the air, butterflies are not only fluttering amongst the hedgerows.


It’s an early start, this time of year we will encounter holiday traffic. Will the game kick off on time this year with the player’s coach arriving late at Poole twelve months ago? It’s a beautiful sunny morning as Parker pulls up outside Fuggle’s abode in his new PRATSmobile, it’s 8:10am, Citra is already well ensconced in the back seat. 20 minutes later we are waiting for Pharp to emerge from the purple haze that envelops chez Pharp. It’s quite noticeable how many dead bluebottles there are lying on the backs having suffered an excruciating demise in this part of Rushden. Thankfully, the next couple of hours travelling were refreshingly calm despite two tubs of mushy peas having been consumed the previous evening. The PRATS sorted out all the world’s ills, we moaned about everything and everybody and whilst Pharp’s back passage was relatively inert, it didn’t stop him using it for most of the discussions on our way to our first port of call. One of the main topics of conversation and source of much debased humour was a new fellatio cafe that is looking to open in Paddington. Citra wanted to know how he could get on the staff interviewing panel. Needless to say the puns were coming thick and fast.


At around 10:30am we arrived at the Apache café, which is located within in the Army Flying museum at Middle Wallop. A pleasant set up, old helicopters, tanks and other military stuff across a vast green airfield. Pharp barked, “look at that old Fokker over there”, to which Citra retorted “that’s a bit unkind, just because he’s wearing a Diamonds shirt there’s no need to call him an old F…..” “Noooo” bellowed Pharp “the bloody bi-plane over there”. Silent titters all around.


Time for some much needed sustenance, the all-day breakfast was ordered and duly snaffled down in quick time. Parker went for a quick fag before we set off to the first ale outlet but not before we picked up the Pharp Easy Breathe. A nice journey across the delightful bucolic landscape, but it wasn’t long before we were queuing up through Salisbury, we eventually arrived at the Wayland Sixpenny Brewery around midday.  We managed to order our ales without picking up any fines. The clientele within the minute bar area were the same as our last visit 15 weeks ago, same old banter. We went and sat in the lounge, well when we say lounge we mean an open-ended ramshackle loggia, knocked up from a few recycled bits of timber. All sorts for seats, including a row of seats out of the back of a bus, a couple of garden seats, plus some old dishevelled dining seats all neatly positioned around a couple of 18 gallon aluminium barrels which doubled up as tables. Citra and Fuggles went for Sixpenny Gold, a refreshing gold ale coming in at 4.2%, the loose head dropped away quite quickly but the ale tasted fine. Pharp went for Cranbourne Chaser, not the sort of ale Pharp would normally drink, this is a light pale ale although described as deep copper, it certainly isn’t. Chaser is a real thirst quencher at 3.9%, this also lost its head quite quickly. Maybe the ‘fry up’ is having an effect as Parker’s Sixpenny 6D, also lost its head. This is a typical English ale malty and bitter and in good condition. 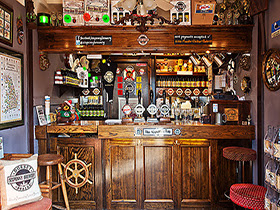 Sitting in the lounge with us was clearly a local gentleman, his glazed eyes and permanent grin suggested that he had less gorm than most. He may have been the breweries ‘meet and greet’ chappy. “Are you local”? he asked. “No” we replied, “we’re from Kettering”. There was a lengthy pause, then “do you like the brewery”? “yes, it’s very nice here”. Another long pause, “are you enjoying yourselves”? “yes thank you”, “Is this your first time”? “No, we’ve enjoyed ourselves lots of times” another silent titter all around.


The Weebles arrived, although it was not the full complement, only Marshall, Wort and Filch were in attendance. Cardiac had a good excuse for not being at the first game of the season but we are sad to announce that Petit Chemise may be an EX-PRATS. Petit has chosen to have a house warming party on the first day of the footy season. Petit may well wear the chemise but he appears to no longer be the wearer of the pantaloons, a sad loss. The PRATS are considering sending in a rescue party. Time for another ale, Fuggles and Citra went for the Cranbourne Chaser, Pharp went for 6D. The brewery moves to a new location in September so this will be our last ever visit here. We expect to be dropping in to the new premises on our trip to Weymouth next March.


Time to move on, we are running well behind schedule, it’s 1:00pm so we don’t have time to go to the Tom Browns in Dorchester, especially as we would waste time parking up. So we’ve decided to go to a mystery pub, the first one we come to after we pass Blandford Forum. We hoped for the best that they’d have decent ales available. 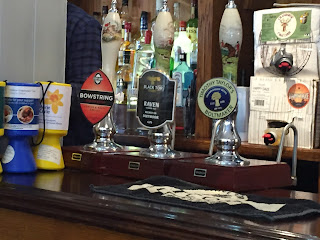 And so we arrived at the Milton Arms at Winterborne Whitchurch. Luck was on our side, 3 real ales and decent ones at that. One from Eight Arch brewery in Wimborne, Bowstring, another from Black Tor brewery near Exeter, Raven Session Ale and finally Timothy Taylors Boltmaker, a former champion ale of Britain. Fuggles and Citra went for Bowstring, a pleasant enough ale. 3.8%session ale, slightly malty with a decent bitterness. Pharp settled for Raven, not as dark as he was expecting, more a light chestnut It was hazy, Pharp struggled to get it down his neck, he persevered. The Milton Arms is more a restaurant than pub, grey paint everywhere, the walls, the bar, the window frames, you could say the Milton Arms is a bit sterile.


We arrived at the Avenue Stadium around 2:40pm, guess what the match is delayed, but only by 10 minutes. It would appear the team coach only arrived at 2:25pm. It a nice compact tidy ground, although if you sit near the back of the stand you will get a pillar occasionally blocking you view. The match camera man perches himself almost directly behind the pillar, quite bizarre. If you watch any match highlights from Dorchester the chances of missing a vital tackle or shot on goal is highly likely.


The match, well we won here 4-1 just a few months ago, it wasn’t going to be easy this time around. By half-time it was 0-0, but the second half proved good for the Poppies finally overcoming the Magpies 2-0. The Poppies supporters were in good voice; they’d endured a long journey down now it was time to make the long journey back but at least with a smile on their faces.


The PRATS were heading for the Towcester Mill brewery tap, we were making good progress until we reached the M4/A34 junction and sitting in front of us was a stationary queue of traffic. It would be 8:30 before we got to our destination. The bad news in all these delays is that Pharp’s digestive system has had a considerably long time to ferment. We suggested to Citra that it might be a good idea to put on the ‘Pharp Easy Breathe’, we didn’t realise he’d already got it on. Whatever Pharp had been eating and drinking was now developing into something grisly causing severe discomfort for his fellow travellers. Thankfully we managed to get to Towcester and quench our tonsils. We all went for Mill Race, a lovely refreshing blonde ale, easy drinking at 3.9%. It’s always in good condition here, beautifully clear, tight white head clinging onto the glass all the way down to the bottom, you can count the number of swigs we’d taken to down the ale by counting the foam rings down the glass, marvellous!


Next up for Fuggles and Citra was one of the guest ales, we are suckers for all ales from Salopian, so The Bends a whopping 5.2% American pale ale, was the perfect pint to close the night off. We weren’t disappointed, lots of citrusy grapefruit, a white head, golden and incredibly easy drinking.


Time for home, a good start to the new season, a decent away win, a couple of decent brewery taps serving fine ales. We arrived back in Kettering around 10:20pm. Next up is our favourite place to go, Redditch, but thankfully their ground isn’t ready for the new season so we’re off to Bedworth. Not the best place on the planet but at least there are some decent places to sup some ale.