OUSE FOR AN ALE

It’s bank holiday Monday, one of the great footy days when the Mighty Red (grinding to a halt) machine play in a local derby, fantastic. Today the Poppies have a nice local game away at King’s Lynn …..screeeeeetch, hang on a minute, King’s Lynn? That’s a 134-mile round trip, what’s local about that? Unbelievably there are 9 other clubs in our league closer to Gods chosen town than King’s ‘bloody’ Lynn. We could have gone to St Ives, Cambridge City or even Biggleswade, OK maybe not BIggleswade, there are limits to our suffering. I guess we are one of the closest clubs to King’s Lynn, a settlement that endured the scorn of stone age NIMBY’s no self- respecting Neanderthal wanted the hermits of Norfolk anywhere near them. Norfolk is the birthplace a couple of famous people, Horatio Nelson inventor of the famous wrestling hold and perhaps the greatest vocalist and songwriter ever to set foot on this planet; Alan Smethurst, otherwise known as the Singing Postman. His classic "Hev Yew Gotta Loight Boy" from 1964 is often performed annually during the Proms in the Royal Albert Hall.


Still we must make the best of what’s before us, to be fair there are a few decent boozers in close proximity to the Walks. But it’s very difficult to see passed the Live & Let Live, just 5 minutes’ walk away with a good choice of ales.


Will the Poppies turn up? So far this season we have been very inconsistent, considering the number of players we have from last season we expected a steady start. Far from it.


On the way home we have some great pubs to choose from, there's plenty of Elgoods pubs in Wisbech, but we have their ales in our clubhouse so we’ll give it a miss. Peterborough offers a great choice, Citra will be hankering for some Oakham ales brewed locally, the Palmerston Arms on the Oundle Rd is a great boozer with all 14 ales served straight from the barrel. But we may by-pass all these and make our way to the delightful Barnwell village pub the Montagu Arms. 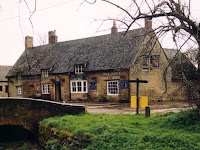 They usually have 4 ales with at least one brewed locally.


Hopefully a good bank holiday day out, the ales will be OK, not sure about the footy.