A lovely August bank holiday Monday, the weather was set fair, a pleasantly warm afternoon was in store. It was just after 11:00am when Parker arrived, already on board was Citra and Poppy Parker, the chauffeur’s young’un. Poppy doesn’t say much, unless she becomes peckish, then you have a job to satisfy her avaricious appetite. Unfed, Poppy can deliver a low oscillating whine accompanied by the glare from hell, turning most unsuspecting souls to quivering wrecks, fortunately Parker can return a similar glare.


We collected Pharp and made our way via the flatlands to Nelson’s County. It would seem the butchers from this part of the country produce rather competitive snorkers. As we approached King’s Lynn we were greeted by a considerably long slow queue of traffic making their way to the Adrian Flux Stadium to watch Big Banger racing. That old racing sage Lincs Links passed Curly Cumberland on the line, Curly was ok on the bends but struggled on the straight. 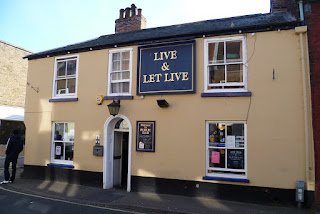 We arrived at the Live and Let Live around 1:15pm, the Weebles had already settled in, Marshall, Petit Chemise, Cardiac and Wort had made the trip. This is a decent back street pub, a couple of rooms, we were in the Snug. The landlady was beavering away just as she was on Boxing day last season. This is a pub for the locals, I suspect most of the regulars live quite close by. We ordered some ales, 5 ales and 2 ciders were available. Citra and Fuggles went for Wolf Brewery’s Edith Cavell, a 3.7% pale ale, quite thirst quenching, we couldn’t quite put our finger on the taste, vanilla was one suggestion, in the end we decided that as the ale was named after a famous nurse the taste was medicinal like. It was nice and clear with a very tight head which clung on to the glass right down to the bottom. Pharp went for Wolf Brewery’s Sheep in Wolf’s Clothing, a 3.7% mild. Not as much malt aroma as expected but with a slightly hoppy finish. A rich brown colour, perfectly clear and once again a very tight head. Parker had a pint of Oldershaw Brewery’s Newton’s Drop. A very nice 4.1% chestnut ale, loads of caramel flavours with a decent bitterness at the end. As expected the head was very tight and the ale was delightfully crystal clear. They certainly know how to look after their ales here.


Blasting out from the pubs jukebox was an antipodean entertainer of ill repute, he wears thick rimmed glasses, has a beard and likes blowing his didgeridoo, recognise him yet? It was an odd tune about 'the fascinating witches who put the scintillating stiches in the britches of the boys who put the powder on the noses on the faces of the ladies of the harem of the court of King Catactacus, who just happened to be passing by'. Or words to that effect. I haven’t got he foggiest idea what that means or who on earth put it on the juke box, let alone put money in to listen to it. Live and let Live I suppose.


The Poppies supporters bus had arrived and just before 2:00pm a load crammed into the pub, mostly into the very snug Snug bar. Business must have been appreciated because within 20 minutes a bowl of piping hot sausage rolls appeared on the bar. Unbeknown to the very industrious landlady; standing at the bar was Kettering’s snappiest dresser, the swarthy, bottle bottom bespectacled, Eli. Eli’s attire put’s an entirely different interpretation to ‘the fifty shades of grey’. It doesn’t matter what colour shirt he is wearing; it will look grey. Eli is also a human food hoover. If there is any food about, whether freshly produced or leftover from some event, no matter what it is, Eli will snaffled it down. We had another round of ales, mostly the same as before although Fuggles went for the Newton’s Drop, this was followed up by a half pint of Grainstore Brewery’s 1050, this is regarded by some ale aficionados as tasting just like the famous original Ruddles County. Marshal has other ‘quite loud’ opinions. Nevertheless it is a delightful mahogany coloured ale a whopping 5.0%. There were a few locals in the bar now, there was one curious moment when one of the locals arrived on his bike. So as to deter the would be bike tea leaf he chained it against conveniently positioned drain pipe, he then hung his shopping onto the handle bars and walked into the pub, doh!


That was it, time to stroll down to the Walks home of King’s Lynn Town FC, they didn’t use the Town in their name until an acute shortage of spondulicks forced out of business back in 2009. They have bounced back well since they reformed in 2010, the stadium is probably one of the best in this league, always a pleasure to attend. One of their sponsors in Woodforde Brewery, with Wherry available in the clubhouse, nice. They also have a supporter who shouts considerably loud. He stands behind the goal unleashing a long bellow, literally bending over backwards in an effort to launch his voice to the other end of the ground. He doesn’t seem to care who is standing around him, he carries on unperturbed whether it be home or away supporters. Well actually not many home supporters stand that close, they know what’s coming. The game, well the Linnets had the best of the first half going in at half-time one up as a result of a super volley. On many other occasions the ball may well have ended up somewhere near Snettisham, this time it almost took the back of the net out. The second half was a different story, a few substitutions and a very influential former Poppy going off injured swung the flow of the game our way. It was clear during the final half hour the game was only going to go one way, the Poppies ended up winning 2-1. Apparently the Linnets haven’t triumphed over the Poppies since 1971, marvellous. Time for home 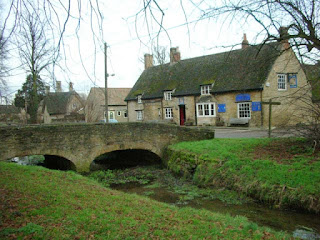 It was around 6:10pm when we arrived in the delightful typically English country village of Barnwell, former home of the Duke and Duchess of Gloucester, although they still own the Manor they’ve now buggered off to Kensington Palace. The Montagu Arms, the Montagu’s were a bit chummy with Henry the Eighth. A nice pub, flagstone floors, sandstone walls and low ceilings, considering the association with Henry I’m surprised there wasn’t a ‘Mind Your Head’ sign. They had 4 ales on hand-pump. Adnams Southwold bitter which Parker went for, a typical English session ale coming in at 3.7%. Brewed using Fuggles hops and East Anglian Pale Ale malt barley, quite pleasant but the ale lost its head very quickly. Citra and Fuggles went for 4T’s Pale Ale, 3.7% of very little to be honest, not much flavour at all, quite disappointing, it was also quite flat, the head melted away within minutes. It was clear, if you were gagging you would be grateful, but not today. Pharp got up and made his way to the latrines, whilst we were quietly sitting in the Montagu it became quite evident that Pharp had not unleashed the insidious vapours from the bowels of Armageddon. They’re called the bowels of Armageddon because that’s what people holler when they see Pharp approaching. You can clearly hear “Armageddon” but then all you see is a plume of dust spiralling away in the distance, we never get to hear the “out of here” bit. So why was Pharp dormant, the conclusion we came to was that Poppy Parker’s presence had either nullified the gas production or Pharp was working overtime clenching his buttocks, either way none of us wanted to be around when he released the tension on his left buttock. Most of us regretted not going to the latrines before Pharp, fortunately, Citra managed to sneak in just before him. Why was Pharp walking with his shoes pointing in opposite directions, was this clear evidence of the clenched buttock affect? 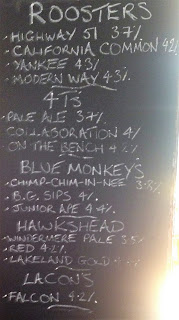 Citra and Fuggles had one more pint and went for the locally brewed, not even a mile away, Digfields Ales Fool’s Nook. A quite tasty pale ale coming in at 3.8%. refreshing with a citrusy finish but once again the head disappeared straight away. A shame really, a very nice pub with a great location on the village green, adjacent to an old stone bridge crossing a babbling brook, but the ales fell short of perfection, which was in complete contrast to the Live and Let Live. What is concerning is that this pub clearly like to serve a good selection of decent ales as the ‘ALES COMING SOON’ board suggested. Fuggles may have to bring Lady Fuggles out for a visit just to check and hope this was a one off. The Wednesday £10 steak night looks good.


That was it, a good day out, we won a game, had some ales all bathed in warm sunshine. Next up we go to Leek up in Staffordshire for our first and hopefully not our last encounter in the FA cup this season. There are quite a few excellent pubs in Leek town centre all part of the Locale scheme, Titanic, Joules and Whim breweries all have pubs in the town centre. Lovely, in fact marvellous.