GOING FOR A LEEK OR THREE

It’s FA cup time again, so far this season goals have been hard to come by, will the Poppies add to their record breaking goal tally? This season we start our hopefully long campaign in Staffordshire taking on former Conference side Leek Town, although they were only in it for two seasons 97-98/98-99. We won 3 and drew one, hopefully we can keep that trend going.


Leek town centre has a loads of decent pubs, just like last season at Market Drayton we will get the opportunity to sample some Joules ales in the Cock Inn, 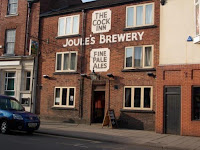 just along the road about 20 yards away is the Titanic brewery owned Roebuck, loads of ales here. A pub crawl is on the cards with far too many good pubs to go in them all, maybe we could try the Cobblers, 6 ales available here. Leek have a micro-pub the Leeky Tap, it only opened a few weeks back with 5 ales available all served on gravity. If you fancy a taste of Belgium then the Den Engel might be the place for you. Owned by Titanic Brewery you will get a couple of good old English ales, but they also have over 100 bottled beers and 10 foreign ales on tap for you to choose from. There’s more, no town centre with this many pubs could get away without having a Red Lion, owned by Hydes Brewery. Then we could try some ales from the Whim Brewery so it’s off to Wilkes Head. All these pubs are within a 6-minute walk and we’ve walked past a few. How many the PRATS will frequent is difficult to know, maybe half a pint in each. Maybe some before and some after the game. The good news is that the footy ground is only a 15 minute walk from the town centre, the bad news is the weather forecast. The rains of Ranchipur have followed us up the M6 from Latimer Park, bring your Pacamac you’ll need it.