It was around 10:30am when the PRATSmobile pulled up outside Fuggles abode. It was a mild day but the wind had the potential to cut through you; so jumpers and cardies were the order of the day, Autumn is upon us. FA cup day and a shortish trip up the M6 to the Black Country to Rushall. We were within spitting distance of Walsall when that old joke reared its ugly head. Here we go, a police car pulls the driver over, the driver winds down the window. The officer asks the driver, What’s your name? Goodall. Where have you come from? Walsall. Where are you going to? Rushall. What sort of car is this? Vauxhall. What have you got in the boot? nothing. Hopefully, that horrendous attempt at humour can be put to bed for another couple of decades. We arrived outside our first watering hole at around 11:45am, we were early the Black Country Arms didn’t open until noon. There were, what looked like a couple of parking spaces, other cars were parked here, but we weren’t sure if this was a proper parking area. We asked a local chap about parking the PRATSmobile. Well, he scratched his head, then set off on what can only be described as a high toned wailing recital. He pointed up the hill and gestured around the corner, he turned around and pointed up another hill and around another corner. We all said thanks, three of the PRATS looked at each other and shrugged their collective shoulders. We hadn’t got a clue, fortunately Citra used to live around these parts so he repeated it all again for our benefit. Parker, Pharp and Fuggles looked at each other and shrugged their collective shoulder, we still hadn’t got a bloody clue. So we took the car to the ASDA car park. We hung around outside the pub looking like desperate vagrants waiting for it to open. Then a couple of Walsall fans arrived, they started to talk to us, we nodded. We managed to deduce that they were playing Bolton Wanderers, and low and behold a few minutes later a group of Notlobians arrived, they started to talk to us, we nodded, said “yes” occasionally, but respectfully altering the inflection to give the appearance we knew what they were talking about. Fuggles looked at Citra for guidance, he shrugged his shoulders and said “dunask me”. 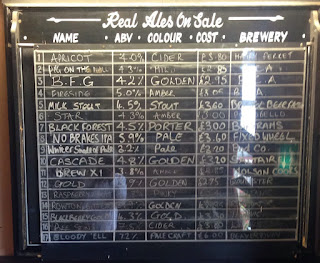 At Last the pub opened and the twenty thirsty throng thrashed through the slightly ajar door, bowling over the diminutive apron adorned maiden who was opening up. Fuggles slowly walked in after the rest, giving the appearance of complete control, pretending not to be gagging for an ale. In the bar, the barman asked who’s first, like clambering school kids the thirsty throng all hollered “me sir, me sir”, waving their folding money in the air trying to catch his attention, it looked like the stock exchange floor. Here’s a question, have you ever heard a Brummie or Black Country accent spoken in a deep tone? Why do they all sound as though they’re wearing a pair of underpants three sizes too small. There is a person at the Poppies, who lives out by Dudley way, we won’t reveal her identity as we might get sued. She is from god’s chosen town and generally speaks with a ‘Ketrin’ accent but occasionally drifts off into a Black Country lilt and every time she does her voice goes up a couple of octaves.


At last we got ale, Fuggles and Citra went for Black Country Ale (BCA) BFG, nothing to do with Roald Dahl, BFG stands for Bradley’s Finest Golden, and before you ask, no we haven’t a clue who Bradley is. As the name suggests it is a golden ale with a tight white head clinging to the glass. It’s very clear and refreshing, quite citrusy coming in at 4%, very nice. Pharp went for the BCA’s 4.2% mild, Pig On The Wall, deep brown colour, when asked, Pharp described it as “like licking a field of almost burnt stubble”, quite! I’ll leave you to work out what that means, but next time you hear Jilly (hollyhocks) Goolden use it to describe the finest Chablis, you’ll know where you heard it first. Parker went for the old classic M&B’s BrewXI. Bloody hell we haven’t seen this for years, it used to be brewed in the Cape Hill brewery which was situated just down the road, now I believe Brains knock it out under contract to Milson Coors. It was a session ale in its day, brewed for the men of the Midlands. 3.8% golden amber ale, it doesn’t say a lot but it will satisfy many palates, it looked in good condition. 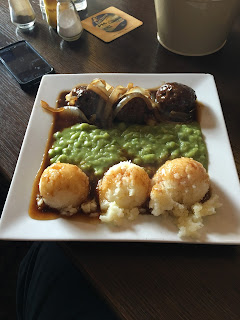 Whilst supping the first pint Citra and Pharp scanned the menu and duly ordered the faggots, creamy mash and mushy peas, we rejoiced in the knowledge that this was a short trip, very little time for fermentation. The snaffle arrived, all very symmetrical, 3 ice cream scoops of mash down one side of the square plate, 3 faggot swimming in onion gravy down the opposite side with a green lava flow of mushy peas down the middle, it certainly looked wholesome. More beer, Citra stayed on BFG, Fuggles went for Whiter Shade of Pale brewed by Bad Company, close. Coming in at 3.2% Fuggles was not going to get inebriated on this, it was OK with very little taste, it was in decent enough condition. Pharp decided to try Bartrams Black Forest Porter, as you would expect with a porter loads of chocolate, but with the name you would also expect cherries and you wouldn’t be disappointed. Dark and rich with a good tight head coming in a 4.5%, lovely. Time to move on, we trudged back to the ASDA car park, passed a couple of boarded up buildings. if it wasn’t for the droning accent coming from the shoppers you could easily believe you were in Merthyr.


Just a couple of miles away to the ground, we parked up in the club’s car park. We decided to walk to the pubs just down the road, no more than 200 yards away by the canal. As we left the car park a coach arrived full of vagrants, ne’er do wells and Eli, the supporters bus was here. As we approached the pub the first thirsty Poppies lout raced passed us, it was Captain Kirk’s boy Dick. A couple of seconds later a rather tall young lady followed in hot pursuit. She looked desperate, Pharp shouted “are you chasing Dick”? she waved back, which was nice. We were all surprised, we didn’t realise Carla only had a middle finger on her right hand. We arrived in the Boathouse, to be followed by the miscreants who appeared to get preferential service. They all got served before we could get our order in. Just 2 ales to choose from but not too bad, Citra and Pharp went for Marston’s New World Pale Ale, a very nice refreshing ale, using Australian hops which will always bring out a zesty citrusy flavour, at 3.8% it has become a very popular addition to the Marston range. Fuggles went for York brewery’s Guzzler, a 3.6% blonde ale, very nice quite refreshing, easy drinking, a little bit of grapefruit in the aftertaste. In good condition. Parker settled for a coffee. 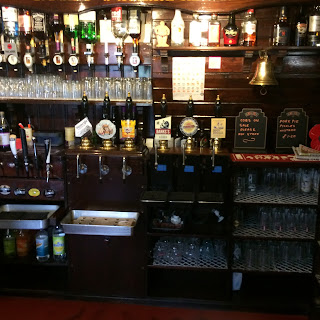 We only had the one pint, but whilst we were guzzling in the Boathouse, Poppies radio, in the guise of Companion accompanied by Oswald were lubricating their vocal cords just down the tow path in the Manor Arms. Said to be one of the oldest pubs in the country, been around since 1105 and they’ve held a licence since 1248. A unique bar, there isn’t one, just an open serving area. We asked Companion for his opinion, “marvellous” is all he said. Sounds like we may have gone to the wrong pub.


Time for some footy, Dales Lane stadium is OK, portacabins painted white make up most of the buildings, the clubhouse opens up into the ground. A long covered terrace down one side with two stands, one on each side but as far away from the clubhouse as you could be and still be in the ground. One of the stands had an ‘Evolution’ sign running along the top. The pitch has a very steep slope from side to side and clearly affected the play, the Pics must be able to make home advantage count with a slope like that. The game well, we worked hard and were 2 up by half-time. The second half we were made to work even harder and eventually scraped home 2-1. Our cup run goes on and we add two more goals to our FA cup goals tally. 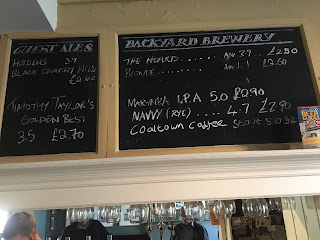 Time for home, we decided to go to the Fountain in Walsall, the Weebles went in here before the game and described it as a bit of a Forest Gump. Unperturbed, we went anyhow, a pleasant back street town pub owned by Backyard Brewery, and as such their ales were available along with a few others.  Fuggles and Citra kicked off with Backyard Blonde, Pharp said he just to know one of those. A nice fresh tasting ale, loads of citrus fizzing on the palate, in very good condition. 4.1% and a decent price at £2.60. Pharp settled for Backyard’s Hoard, 3.9%, another golden blonde ale but with more malty notes. Once again in good condition. By now the pub was filling up, live music from 8:00, I think the band were in the Snug with us, there was a group of people all wearing bowler or cowboy hats and they were all wearing waistcoats. Just time for one more ale, Fuggles went for just a half pint of Marinka IPA, a whopping 5%, very nice, you could taste the strength with plenty of fruity bitterness. Citra had another Blonde, that was it for the day. Time to go home, Pharp was now percolating inside, the odd rumble was there, but we got home relatively unscathed.


With a win today we won’t be going to Merthyr on the 30th, which means a Tuesday night in November, shame really, the PRATS may not make the trip this season, it’s always a good day down in the valleys.