Here we go again, it’s FA cup day, hopefully the first of many. What a difference 5 days can make, on Monday we were bathed in bright warm sunshine, today it’s persisting down, damp and not at all warm. We are going up north to Leek, and today we are without our usual chauffeur Parker, he is otherwise engaged. Today we are being conveyed to our destination in the retro rocket propelled Pharpmobile, the only vehicle in the country that has both internal and external combustion engines. The driver’s seat has a special chamber beneath it which is directly connected to the fuel tank. It was just before 11:00pm when we drifted out of town, travelling through a constant shroud of grey mist and car spray, not a pleasant journey. As we left the A14 and joined the M6, Pharp turned on his satnav and asked which way are we going. Citra pointed to the horse bolting up the M1. Pharp the Navigator is renowned for knowing every short cut in the country which just happen to be a bit longer than first expected. It’s no coincidence that Pharp’s favourite band Supertrump were playing on the radio ‘Take the long way home’, don’t worry we will. After a couple of hours of virtually continuous downpours, the fear of the game being called off descended upon us. We are now so conditioned that any amount of rain, let alone the deluge we were driving through brings out this fear. But as we enter outskirts of Leek, there is a cessation in the persistence. Not exactly clear skies but just enough to bring forth some hope. It wasn’t long before we were parked up in the town centre, we were on the roof of Wilkos. Walking down to the street level we went down the steepest pedestrian slope possible, Eddie the Eagle went flying passed us on a practice run. 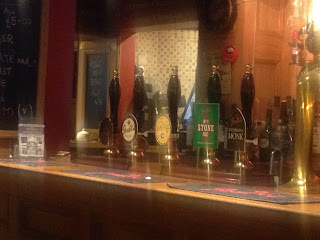 Leek is blessed with an inordinate number of pubs, with only a couple of hundred yards to walk to get to the first one. Through an alley from the car park and we were on the main street and there before us was two pubs, the Cock Inn on the left and directly across the road was the Roebuck. First port of call was the Cock Inn a Joules pub. A nice typical town centre, quite smart with a long restaurant area towards the rear. Cumfy leather chairs and wooden stools around the tables, all very nice. 5 hand-pumps graced the wooden panelled bar, 2 guest ales, Draught Bass and Sarah Hughes Ruby Mild, plus 3 ales from Joules Brewery, Pale Ale, Slumbering Monk and a new seasonal ale No1 Stone Ale. Joules are now based in Market Drayton but they were originally in Stone, so this ale is brewed to celebrate their heritage. Pharp went for this, beautifully clear with a good head, this is brewed with 2 New Zealand hops so will be quite bitter. Fuggles and Citra went for an old favourite Joules Pale Ale, it had a slight haze but tasted fine with a good head, an easy drinking ale coming in at 4.1%. In the bar snaffling down the extremely good value for money food was Petit Chemise on his way home from a camping break in Wales. In tow was Chemise’s better half Petit Pantalon, wearing a replica Poppies shirt, marvellous, clearly well trained. Pantalon was duly introduced to the PRATS, it was clearly perceptible that when it came to Pharp’s turn, a grimace slowly spread across her face, you could see her step backwards. Pharp’s infamy preceded him, was he walking backwards? There were a couple of Scottish chaps sitting in the corner chatting away in their broad accents. It was difficult to understand what they were talking about, it was either football or duck walking, something to do with the Waddled Cup. Time to walk across the road to the Tudor looking Roebuck. 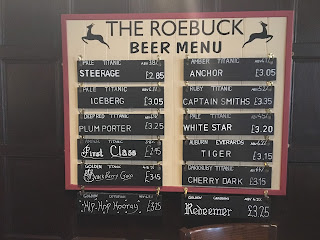 This pub is owned by Titanic Brewery and just to prove the point the bar was adorned with 10 hand-pumps with 8 of their own ales available, plus a couple of their craft beers. Another nice pub with food forming a large part of their business. With so many ales to choose from it difficult to know where to start so Pharp went for Steerage, a 3.8% easy drinking golden session ale. Quite refreshing with a good balance of malt and hops. Citra and Fuggles settled for Iceberg, a pale zesty ale coming in at 4.1%, very much up Citra’s street. Both ales were in excellent condition perfectly clear with good tight heads. Only time for one ale as time was moving fast. On our way back to the car park we spotted the Leeky Tap tucked away in the corner, bah humbug! not enough time we had to get to the ground.


Harrison park is a very nice ground, the pitch looked perfectly flat and green, apparently it’s had £100K spent on it. Nice high stand, the game always looks better when looking down onto the pitch, there’s covered terracing on three sides. All around are adverts for EsterChem just to annoy the chemical works across the road, they make Formates, Acetates, Agitates and Irritates.


The game, well it was just what you hope for in a cup tie. End to end stuff, the Poppies were moving the ball around well but Leek also had their moments, it was one each at half-time. The second half was just as intense, at two each the Poppies missed a penalty to win the game in extra-time. But no cup tie is without drama, step up the penalty villain to blast home a Poppies winner in the 93rd minute. General jubilation amongst the Poppies supporters, the Leek supporters decided to give the ref a bit of stick. Marvellous! 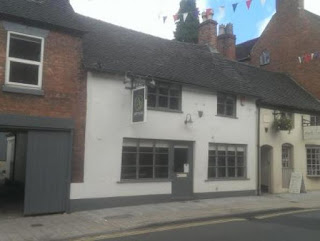 Time for home, we decided to go for pot luck and made our way to Ashbourne. So with the trusty I-phone looking for pubs on the Whatpub app we plumped for a new pub the Artisan. We eventually managed to get parked up in the town square which is surrounded by pubs, tea rooms and chip shops. It was just a short walk to the Artisan, this pub only opened in June this year and is housed in a former hairdressing salon. Quite an old building, the bar area was quite small no more than half a dozen tables. All the furniture looked as if it had been knocked up from recycled wooden planks with some wrought iron legs thrown in for good effect. There were 4 hand-pump on the even smaller bar area. The cat in the back yard had bandages all around it’s head, someone obviously trying to prove a point. The bar staff we wearing radio-active blue polo shirts with hair colour to match. On offer was St Austell brewery’s Cornish ale, Dark Star’s Dark Star ale, Bristol Beer factory’s Milk Stout and Hanlons Yellow Hammer. Pharp went for the Milk Stout, as you would expect in a stout, chocolatey sweetness and coffee bitterness coming in at 4.5%. Very clear, rich and dark brown with a very tight head, it looked delicious. Fuggles and Citra enjoyed the delightful Hanlons Yellow Hammer, a lovely 4.2% golden ale packed with zesty bitterness. In the bar was a small group that were dining on what looked like a delightful platter of crusty bread, a selection of cheeses and some home-made scotch eggs, with a few olives and pickles thrown in for good measure. Mmmm, it looked most convivial, should we have one? Maybe next time we’re up this way. With no seats available down stairs we climbed the rickety stairs to the lounge, another small room with some more home-made tables and benches on a very uneven floor, clearly a very old building. In the corner was a group of young chaps and chappesses, talking and laughing very loudly and having a jolly good hoot, back to university in a few weeks I suspect, OK yah? All in all, a very nice pub, well worth another visit one day.


That was it, we’d had enough for one day, time for home. An excellent day out, a good game of footy and some decent pubs, what else could we ask for. We have started on the FA cup road today, where will it take us this season.