Just after 10:00am and we are on our way to Basingstoke, we picked up Pharp then made our way down the usual route. Every season we seem to have a well-trodden path to away games. For years it was the M6, a couple of seasons back we seemed to be crawling around the M25 every second week. Now it’s the A34, but not for so long this time around. We stopped off in Newbury for our pre-match imbibing. We had expected a bit of holiday traffic, but nothing really, a good steady run down. Easy parking and we were supping in the King Charles Tavern just after midday. On the entrance to the pub is proudly displayed ‘West Berkshire CAMRA Pub of the Year 2016’ lovely. A very nice smart pub, two rooms, one with comfy leather sofas and another with scrubbed wooden tables and chairs. The menu says ‘Fusion food’, probably got a nuclear powered oven or something similar. Not unlike Pharp’s complex internal system, it might not work in quite the same way but the end result is the same. The mushroom cloud bap looks good.
There was a good range of ales, 8 in total. Fuggles and Citra started with Roosters Californian Common, 4.2% a delightfully refreshing ale. Golden coloured, the head was quite loose and fell away quickly although what was left clung to the glass. The ale is described as a ‘West coast amber ale fermented with lager yeast’. It was malty and fruity with a decent enough bitterness, very nice indeed. Pharp and Parker went for West Berkshire Brewery’s Good Old Boy, this is probably WBB’s flagship ale, at 4% it’s an easy drinking ale. This ale has won quite a few prizes in its time. Amber in colour, well balanced, it held its head better, we drank this ale during our trip to Hungerford last season. Next up Fuggles went for Wickwar Brewery’s Falling Star, a lovely golden ale coming in at 4.2%, quite zesty with some citrusy fruits on the palette. Citra decided to stay on the Californian Common whilst Pharp went for St Peter’s brewery Ruby Red, this had a good nose full of dark bitter chocolate aromas and the richness stayed with it in the taste. Beautifully clear red ale and surprising refreshing and rich, easy drinking. That was it for pre-match supping, across the road from the KCT was a delightful looking bakery shop with an array of crusty bread and other delights on show in the window. Pharp went and purchased a huge Lardy cake, we prayed he wouldn’t tuck into it early, he had a quick munch but thankfully not too much, the internal combustion developed from this could be somewhat thunderous. 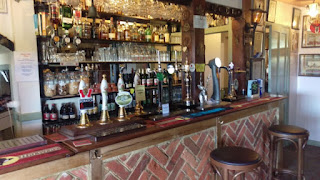 Meanwhile, whist the PRATS were here the Weebles got closer to the final destination and popped into the White Hart in the village of Charter Alley. A lovely country pub which now appears to have its own brewery, although it is very difficult to find out any information. On the pub clip is says ‘Secret Brewing Co. Golden Light. Unfortunately, we didn’t get any tasting notes from the 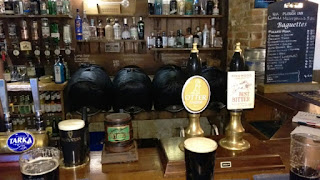 Weebles, they then moved onto the Plough in Little London, another nice country pubs with some ales drawn straight from the barrel, there is also a brewery in this village but sadly none available today.


The match, unfortunately the team coach never arrived at the Camrose stadium home of the Dragons, but fortunately we did have a team of dragon slayers with us so they played instead. Well when we say dragon slayers we actually mean ‘dragonfly’ slayers. Unbeknown to us George had switched sides, he popped up for a couple of goals in the first half. On loan from ‘Honah Lee by the Sea’ was the magical Puff; who frolicked in the barmy breezes then flapped his wings a couple of times before extinguished any flickering flames we may have had. It would seem the Little Jackie paper is covering up the cracks with his sealing wax. We had a quite a few crosses flash across the face of their goal, but just like the Autumn mist, so did we.


Time for home, Pharp fell asleep, but this didn’t stop the Lardy cake from working away and on several occasions we were forced to wind down the windows accompanied by some gasping expletives. This country has no chance of meeting the greenhouse gas targets whilst Pharp is on this planet. According to the scientists, Pharp does more damage than a 200 strong herd of Friesian cattle. The Chief Executive of the Climate Change Committee said, “what chance have we got, I am in the process of lobbying parliament to put a ban on mushy peas and now Lardy cakes”. If only we could harness the energy, we wouldn’t need the French to build Hinckley Point.


As Fuggles was taking the better half out for some pub snaffle, we returned straight back to our fair county and went to the White Horse in the village of Old, this is where the Fuggles are dining. Joy of joys they have 4 ales on hand-pump, so the PRATS all went for Hoggleys Northamptonshire bitter. When this ale first came out a few years ago now, Fuggles was interviewed by Anglia TV in the Alexandra Arms Kettering, it was shown on the local Monday night news. Fame at last even if it was beer related. This is a nice session ale, very refreshing 4% amber ale, easily drinkable and thirst quenching on a warm summer’s day. Pharp, Parker and Citra went off home whilst Fuggles continued. There were 2 Lacon Ales available, Affinity a powerful 4.8% chestnut ale and Encore a more sensible 3.8% session pale amber ale. Fuggles went for this, a very refreshing and easy drinking ale and in very good condition. That’s what Fuggles stayed on for the rest of the snaffling session.


A half decent day out, the ales and pubs were superb, as was the snaffle. The footy, well nothing more one can say but very disappointing indeed. At least the county cricket team did well winning the Twenty20 trophy. Our next away trip will be to Kings Lynn on bank holiday Monday, I hope we can get a few players back.