Today we take the second longest trip of the season to the nuclear green glowing Sizewell FC, just a couple of miles from the east coast. Deep inside Adnams country, bound to get a couple of those down our necks today. It’s our third trip to Suffolk this season and so far it’s 2 wins from 2 visits, hopefully 3 from 3.
An early start, 8:15am from Casa del Fuggles, the weather was bright but a bit nippy in the air. Bill Withers is wailing on the PRATSmobile car radio ‘luvlee day, luvlee day, luvlee day’ and so on, was this an omen.
Citra, was already sitting in the back of the car with a tiny silk man bag clutched firmly under his arm. “What’s in the man bag Citra?” Fuggles hollered. Citra had a supercilious grin across his face and replied “you know the analgeestring the doctor prescribed, well I ordered a spare”. Citra continued, “unfortunately, they sent the wrong size, they sent a 6XL”. Citra explained that he tried it on for size but it was far too big and just fell around his ankles. So, in a moment of inspiration, he pulled the elasticated sides up over his shoulders, and ‘Voila’ a mankini.  Citra did say it was quite ‘eye wateringly’ uncomfortable, before he realised, he had it on backwards, it was the plum tomatoes at the front that gave it away. Citra proclaimed “I plan to strut my funky stuff up and down Leiston High St, my mankini will definitely show my size well”. 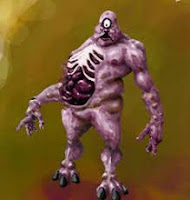 We made our way to Pharpsville, otherwise known as Rushden, a town of much effluence. A few locals were staggering down the main street, arms outstretched in front. The sunken central eye all glazed over, the single toothed, drooling, bottom jaw was dangling to one side just above their barrel chests. Parker sounded the horn, one of them swung round and gave us a ‘W’ sign and immediately walked straight into a lamp post. He was clearly annoyed has he gave the lamp post a Glasgow kiss and collapsed onto the pavement.
Parker was in a chipper mood, looks as though he had something to say. “Tell me Citra, do you have the radiant skin tone to carry off the mankini?” Parker asked in a sarcastic tone. Citra gruffed in retort, “I’ll have you know I’ve just undertaken a Frangipani Monoi Salt Glow”. There was a very loud silence in the PRATSmobile. Eventually Citra continued. “If you don’t know what that is, it’s a rather exotic, full body exfoliation ritual using ‘mineral rich salts’ and hibiscus cleanse and exfoliate. To seal in the moisture, they use an infusion of exotic Tahitian Monoi oil and Frangipani flowers. My skin is now delicately fragranced and positively glowing, So in answer to your rather rude question. YES!” Citra folded his arms in a frumpish ‘mardy’ manner and looked out of the window. We were almost at Pharp’s abode when, eventually Citra snapped out of his strop and started telling us all about his new charity wristband, it was incredibly tight on his wrist. After a couple of days his hand was throbbing, by the end of the week his hand was all black and blue and wrinkled. Citra went to the Doctors, the Doctor said “don’t worry, you’ll be able to shake it off in a couple of days”.
We arrived at Pharp’s around 8:40am, Bill Withers was still wailing “luvlee day, luvlee day, luvlee day”. Now for the long trip eastbound, but not without a return to La hogue garden centre, just off the A14/A11 junction, for a hearty fry up, giant snorkers and all. Citra strode up to the café counter and proclaimed, “I am somewhat esurient”, then he went into a rather camp northern accent and said “ooo, I’m all peckish like”, and ordered the big breakfast. 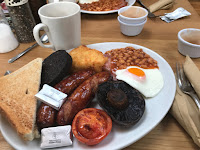 A group of cyclists arrived, usual format skinny legs, pot bellies and the padding in the pants that looks like they’d taken a dump whilst in the saddle. Citra, said, “that’s a clever idea, that one has a map of the motorways tattooed on his legs”. Parker explained, “they are varicose viens, you’re a daft sod, Citra”. Duly fed, we made our way to Leiston. Yes, Bill was still wailing, “luvlee day” and so on. 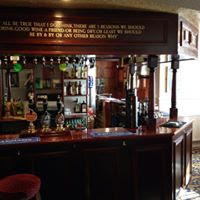 We arrived at the Engineers Arms just before midday, just a 5-minute wait before the doors opened. 3 hand pumps, Adnams Southwold, Adnams Ghost Ship and Greenjack Trawlerboys. Citra, Fuggles and Pharp all went for Trawlerboys. Very nice, as always, a good premium ale coming in at 4.6%. copper coloured and full bodied. The ale was in very good condition, perfectly clear with the head clinging on to the glass. Just like you tell the age of trees by counting the rings, you could count how many swigs we’d taken to sink this fine ale. Good job we can count to two. Time for another, this time Citra and Fuggles went for a Ghost ship, Pharp stayed on Trawlerboys. Ghost ship is another premium ale at 4.5%, pale and quite citrussy, very pleasant and easy to drink, once again in good condition. Several Poppies supporters started to drift into the Engineers, quite a few had arrived the night before, making a weekend of it. The club chaplain arrived, and promptly starting talking about his flock staring and his ring, with some kissing it. Needless to say, chortles echoed around the bar, with a chorus of “are you sure”? We had a few more ales, by the time we left the Engineers, around 40 Poppies supporters were supping the fine ales.
It was just a short drive to the ground, Bill was still wailing on the radio. A tidy set up, although I’m not sure if they had any turnstiles or just tables by the gate. Nevertheless, the facilities looked good, even an impromptu sprinkler system decided to pop up and rinse the players warming up on the pitch. The game, well it was a slog to be honest with chances few and far between. And, what is becoming almost the norm, an injury time winner sent the players, management team and travelling supporters into ecstasy. With the news that the Glassboys had shattered yet again, the Poppies were now 13 points clear at the top with just 5 games to go.
Back into the clubhouse for a beer before the journey home. Greene King’s London Glory, not to be sneezed at, if on the off chance you’ve been wandering across the Gobi Desert for 2 weeks without a bottle of domestos to quench your thirst. What an incredible waste of water, hops and barley. Time for home, “luvlee day, luvlee day, luvlee day” Yes, you’ve guessed it, how long is that bloody song? 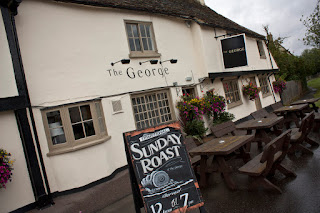 After a couple of hours, we decided we needed a toilet break, lucky for us the George in Spaldwick had a suitable latrine. We don’t like to be rude so we had a pint whilst we were there. Fuggles and Pharp went for Timothy Taylors Landlord, Citra decided on another Adnams Ghost Ship. It there is citrus in the description, Citra will drink it. Parker had a London Pride. The pub was packed with diners, a pleasant village pub, the food looked ok, dressed with the obligatory foliage on the side of the plate. Just the one pint, we dropped Pharp off in Rushden, the local bloke was still giving the lamp post Glasgow kisses. Parker dropped Fuggles and Citra off at the Alexandra Arms, just a for a couple more. We both went for Newby Wyke’s Banquo, 3.8% very pale, bitter and citrussy. A session ale, quite refreshing and tasty, easy to quaff. Newby Wyke ales are always very good, won quite a few awards in their time. Just one more before calling it a day, this time the excellent Marston’s Old Empire IPA, 5.7%, a good night cap and a proper IPA. Pale, citrussy, bitter, fresh and crisp, with a delightful hoppy aroma. Very Nice. That was it, a luvlee day, 3 from 3 down in Suffolk, thanks to Bill that will be going on in our heads for a few days.