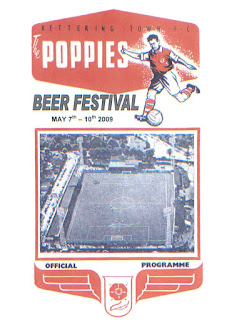 It seems like a lifetime has passed, another world, a different time. 11 years ago, this weekend we held the first ever Poppies Beer Festival, 7th – 10th May 2009. The Tinhat would be heaving, live bands, marquees outside, 3 double rows of barrels, 41 different ales, 3  lagers and 2 ciders across the 3 bars. Food was being served by the Poppies Pantry, hundreds of people sitting everywhere. Live bands every night with 4 on Saturday. It was a new venture, we didn’t really know what we were doing, but what the hell. Sadly we had just recently lost Poppies stalwart Bernard Bennett, Bernard would have loved a beer festival on his own patch, sadly..  The ales were £2.20 a pint, the total bar take that weekend was just over £6,200. Cleary, we like a drink. Phipps brewery had just started brewing again, albeit at the Grainstore brewery in Oakham, and we were the first place in Kettering to sell both Phipp’s IPA and NBC Red Star, we even had a Phipps banner in the bar. The beer list consisted of the following, we even got lager in for Dazza, he didn’t like the warm gnat’s piss.

We had 3 bars, the main bar, another along the same wall as the main bar up to the double fire doors. Then a L shaped bar from the other side of the fire doors, turned right and along the wall that looked out onto the pitch.

Through the double fire doors was the large marquee 12m x 6 m, full of bench tables. Up the steps to the raised area by the canteen were more bench tables and parasols.

Nearby were the toilets and further along was Poppies Pantry, serving all sorts of beer festival snaffle. 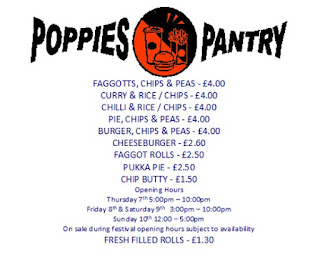 The entertainment wasn’t bad, naturally Dr Busker was on the schedule, as were regulars the Seven Sinners, most of the band were Poppies supporters, Mo still come along to Latimer Park. 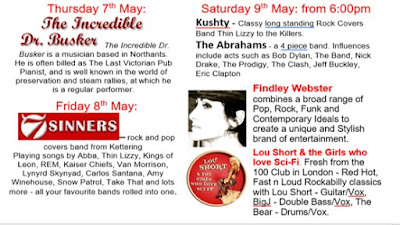 It was a good beer festival, we all got very, very drunk indeed. The first of many, back then we had 2 beer festivals a year, with the second always around Halloween. We’ve had a festival every year since, finger crossed we’ll get one this year.
Cheers
Up the Poppies