It’s a long journey down to Weymouth today 23rd January, exactly 3 months until the end of the season. Dorset will be playing a big part in the play offs this season, especially if Poole blows up again and allow Chippenham or maybe Hitchin to sneak to the top. With Poole, Dorchester and todays opponents Weymouth all in and around the play-off spots and hopefully us, we could be down this neck of the woods a few times come April. We are already down at Dorchester on the last Saturday of the season.
We left Fuggles Hall at around 8:00am and made our way to pick up Pharp in Rushden, Pharp was wearing his Kettering Tyres shirt. A couple of hours later of clear roads yet quite misty in places we arrived at the Little Chef just south of Newbury. It didn’t take long for the awesome foursome of elite athletes with their fine honed physiques to go for the Olympic breakfast, 2 rashers, a sausage, 2 eggs; fried of course, no toast for us we much prefer the healthy option, fried bread it is, mushrooms, beans and a large portion of fried sliced potatoes, all washed down with a pot of tea, marvellous. 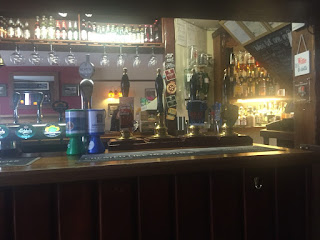 Suitably stuffed we drove on and arrived at our first watering hole The Royal Standard in Upwey just after midday. As we entered the bar we were greeted by the vision of a Kettering Tyres replica shirt worn by Dave Tailby, what a lovely sight, the shirt not DT. Unfortunately that was the only DT we was going to get today. The Royal Standard is home to the DT brewery; sadly they weren’t serving any of their ales, they were all at the bottling plant, what a big disappointment. Never mind they had 5 other ales available, local brewers Sunny Republic’s Red Bus, Wadworth’s Dray Bells and Yeovil Ales Star Gazer, also available from the cellar was St Austell’s Tribute and Proper Job. The temptation to go for Proper Job, but no, we must try the local brews, so Citra and Fuggles went for Yeovil Ales Star Gazer, a pleasant copper coloured standard bitter coming in at 4.0%, it was in decent nick but not a shop stopper. The pump clip for Star Gazer is the same colour green as our old rivals the Glovers. Every time I see anything related to Yeovil I’m reminded of the time they came to Rockingham Rd in the early 70’s. Yeovil were pushing for promotion to the football league through the annual voting system. On this occasion the Yeovil team came out of the player’s tunnel each with a letter, they lined up to spell ‘VOTE YEOVIL’. Big Ron Atkinson ran out of the tunnel leading the Poppies and promptly blasted a ball at the lined up Glovers, they immediately scattered like pigeons, much to the amusement of the Poppies faithful, happy days. Enough nostalgia, Parker and Pharp had a pint of Wadworth’s Dray Bells, this sounds like a Christmas ale still doing the rounds. This is a typical type of ale for both Parker and Pharp, mid-amber colour, 4.0% strength with the usual seasonal tastes, also in good condition. Next up for Fuggles is Sunny Republic’s Red Bus, a red IPA strong ale coming in at 4.8%, sadly this was a cloudy as pigswill so Proper Job it was, Citra had the same. Always a favourite, very bitter premium ale, citrusy with a strength of 4.5%. This was drawn straight from the barrel so the head was quite loose and struggled to hang on to the sides of the glass, nevertheless it was still delicious. Pharp went for the Yeovil Star Gazer. By now Marshall and Petit Chemise had arrived, we had 3 Kettering Tyres shirts in the bar including Pharp’s, hopefully we’ll see a few more in the ground. Time to move on into Weymouth, we parked up around 1:30pm and trudged for a couple of minutes to our next destination. As we turned onto the quayside we were greeted a bus load of Poppies supporters enjoying fish and chips, before we had a chance to walk into the Royal Oak the Poppies travelling horde broke out singing the PRATS chorus. 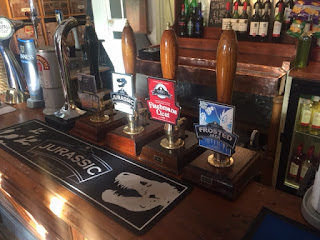 We pretended we didn’t know them. A sign above the door said Brewery Tap, surely not another one? What a great pub, a proper pub with low painted beams, very busy. On the bar was 4 hand pumps all serving Dorset Brewery ales, they also give 20% discount for CAMRA card carrying members, good old Citra brought his with him. Available was Frosted Jack, Jurassic, Flashmans Clout and Portland Porter. Citra and Fuggles went for Frosted Jack, a pleasant hoppy pale ale with a fresh taste but a little sweet our usual palate, easy dinking at 4.3%. Pharp went for Jurassic, a crisp golden ale at 4.2%, slightly more citrus hops than the Frosted Jack, Citra and Fuggles followed up with Jurassic. It was time to go to the ground.

Nice set up at the Bob Lucas stadium, covered terracing on 3 sides and a large main-stand down the fourth. The old Pannacotta army seem to have been in more financial scrapes over the past decade than we have, both of us have been rolled over, by George we have.
The game, well the Poppies looked resplendent in the Kettering Tyres commemorative shirts, our first game for 3 weeks and it showed, we were slow out of the blocks and Weymouth took advantage by scoring after just a couple of minutes. We lost our goalie, off to hospital to have eight stitches in a nasty gash. A clash of heads had also seen a Weymouth player taken off as well. Hopefully both will be back in the game soon. With no goalie on the bench it was up to a Poppies stalwart to protect the net. After about 25 minutes play, the Poppies woke up and scored twice. Dominating the game either side of half-time it looked as though we would go on to claim a great victory, but unfortunately we ran out of steam, conceding 2 late goals eventually going down 3-2. Excellent game, sadly we were on the losing side. 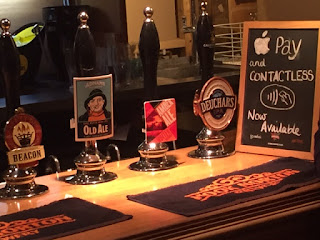 Time to go home, after 2 hours driving we arrived in Abingdon on Thames, by the time we’d parked up outside the Brewery Tap a car adorning the Poppies flag was already in the car park. Marshall and Petit Chemise were in the bar enjoying some local tipple. There were six hand-pumps on the bar in this very busy pub, Everards Beacon, Adnams Old, Shepard Neame Amber Ale Winter Warmer, Morlands Original and Loose Cannon’s Abingdon Bridge. Citra, Fuggles and Pharp went for the latter, this is brewed just under a mile away in Abingdon and is sold regularly here. A standard malty session ale at 4.1%, light bitterness, it was Ok but not a show stopper. Next up was the Shepard Neame Amber Ale, this had a bit going for it in the taste stakes, quite fresh with a good finish. All the ales were in very good condition; beautifully clear with a good tight head clinging to the glass all the way down. Time to head for home, however, a slight change of travelling plans, Mrs Fuggles was in Kidlington just up the road, so we met up at Brackley, Parker and Pharp went off home on their merry way whilst Citra, Fuggles and Mrs Fuggles travelled separately. However, as we approached the outskirts of Towcester; Fuggles had a sudden urge to use the latrine; fortunately they had one at the Towcester Mill brewery tap. It would have been rude to use their facilities and just walk out, so we stayed a while. The place was packed to the rafters, nowhere for Mrs Fuggles to park the backside, never mind we stayed anyway. First up was Mill Race, a delightful hoppy pale ale, followed up with the very nice Naylor’s brewery Resolution Blonde. What marvellously pale blonde citrusy ale, 4.4% of delicious bitterness. It was 10:00pm time to go home. A good day out was had by all, next up Hungerford, this will see the PRATS go through the 4000 miles barrier, we must be mad. Where do we play our home games, I’ve forgotten?