THE DAY THAT THE RAINS CAME DOWN

It was around 9:30am when we received the good news, the match at Beaconsfield, current home for Slooouuu, no sorry, still can’t say it, is on. Hooray, a day away from sodding Sam Smith blasting at top volume all day. Mrs Fuggles was given the CD as a Xmas present and it hasn’t stopped playing since, it’s driving Fuggles mad. I thought wailing was banned in this country. Sam Smith can make a decent pint but for goodness sake, I’ve heard some cat’s chorus’s in my time, but this takes the biscuit, peace and tranquillity and maybe a few beers, lovely.
Within thirty minutes of the call the Prats-mobile was on the road, scooping Pharp up in Rushden at around 10:30am and arriving at our first guzzling station at just after midday. 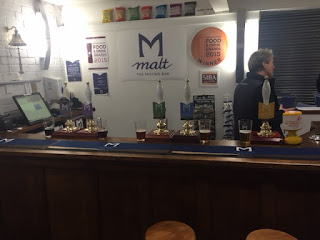 The Malt Brewery is a new one for all of us and what a delightful place this is. The Taproom looks over the brewery with tanks, pipes, barrels and all other brewing tools scattered around. 5 hand-pumps at the quite chilly bar area, the heater was fighting a lost cause, however, the very friendly staff helped keep the place most hospitable. With Pharp’s love of the browner, malty ales he was guided towards the Prestwood’s Best by the small jam jars placed neatly in front of the hand-pump, each filled with their respective ales. Citra and Fuggles naturally went for the Golden Ale. Both ales were in superb condition as you would expect for a brewery tap, they are after all showcasing their products. Beautifully clear, with an inner glow, a good tight head clinging to the glass hanging on all the way to the bottom. The Prestwood comes in at 4.4%, a chestnut coloured ale; a malty aroma greets you before you get to taste it, a lovely ale indeed. This is most likely one for the Poppies Beer Festival in May. The Golden Ale has an abv of 3.9%, nice and citrusy, apparently made with lager malts and Slovenian hops. Very crisp finish another one for the Poppies beer festival. Parker went for an Ecuadorian; it was at this point when we had to explain to Citra that Ecuadorian related to the country where the coffee bean emanated from and not the style of private hair trim. Next up for Pharp was the Dark Ale, a delightful looking ale. This has won a few SIBA awards including this year’s National Silver for standard mild ales. It’s easy to see why, dark brown and tasty at 3.9% and in good nick with the light glowing deep red through it, Pharp was happy. Citra and Fuggles went for the stronger IPA coming in at 5.0%, and as you expect by now this is a lovely ale. Rich amber colour, slightly sweet with lingering bitterness to finish. Marvellous, we’ll be back here in April when we play Chesham just a few miles up the road. Time to move on, this time on to one of the PRATS favourite pubs the White Horse at Hedgerley only a couple of miles away from the ground. Travelling to the White Horse it started to rain, indeed the match commentary on the radio from just up the road in Wycombe said it was pouring down, and it was. Citra asked “what are those two lions doing walking across the field”? In fact they were being followed by a couple of elephants, two ostrich’s, two giraffe’s with a dormouse on each of their heads perched between the ears. There was a whole procession going on. Had they escaped from London Zoo or were they making their way towards the giant wooden boat we could see on the horizon. This was the day the rains came down, but unfortunately glory never shone. 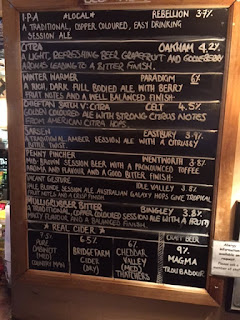 We arrived at the pub around 1:30pm, there were quite a few Poppies supporters in there already, the Weebles were in the busy bar, and we went into the lounge area with the other half dozen or so fans. Eight ales available, Parker sampled the Rebellion IPA, brewed 10 miles away in Marlow and regularly available here. Copper coloured session ale at 3.7%, malty with some hoppiness, nice and with a clean finish. Pharp decided to go for another brown/amber ale, this time Wentworth brewery’s Penny Pincher, 3.8%, Pharp’s comment was “nice”.   Even though Oakham Inferno was available Citra and Fuggles decided to go Celt brewery’s Chieftain Batch V: Citra.  A pleasant ale at 4.5%, dark golden, a few citrusy notes but not overwhelming, decent enough though. It was half way through drinking this that Fuggles received a phone call. The game was now off, Fuggles passed the message through the pub and was greeted with a muffled tirade of expletives, quickly followed by a rousing chorus of the Dr Busker classic, “MORE BEER, MORE BEER, MORE BEER, MORE BEER”. It’s one of those few songs where everyone knows the words. The words never change unlike ‘Happy Birthday’ they change every time you sing it. Undaunted by this news the boozing must go on, so this time Citra went for the Oakham ale, however, Inferno had gone off and Citra had come on, you couldn’t make it up could you. Citra was now grinning with his usual Cheshire cat smirk. Even his suicide haircut couldn’t diminish the glee. We asked Citra about his haircut which was severe to say the least, a No2 setting was used but there were clear signs of unevenness. We wondered whether he was auditioning for the convict character Abel Magwitch in the forthcoming Dickens classic Great Expectations, Citra wasn’t amused, he just drank his beer. Fuggles went for Vacant Gesture, brewed by Idle Valley brewery. Blonde and bitter, 3.8% lovely zingy taste and in good condition. Pharp stayed with the IPA. 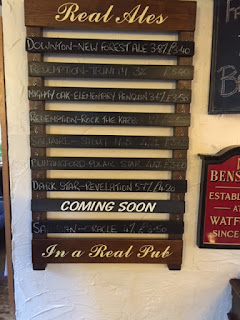 It was now time to move on: up next was the Land of Liberty, Peace and Plenty. To get there we had to go on the M25 for the first and last time this season. Last season we seemed to be on it almost every away game, getting caught up in horrendous queues, thankfully not this season. We’ve frequented the LOLP&P on a few occasions so we knew we would be in for a treat. Pharp had a pint of Downton’s New Forest Ale, bronze coloured 3.8% bitter, a standard ale good for a session. In good condition with a good head, however, we’ve noticed here before the head never clings to the glasses, it must be the stuff they use to wash them in, all the beers are the same. Doesn’t affect the quality of the ale, the landlady here knows her stuff, she’s a judge at the Great British Beer Festival. Fuggles and Citra went for Redemption brewery’s Rock the Kazbek. Blonde ale using the Czech hop Kazbek, hence the name, 4.0% quite zesty and refreshing, very nice. By now the Weebles had arrived. Next up for Citra and Fuggles was the delightful Buntingford brewery’s Polar Star, we’ve had this a few times now, once appearing at the Poppies beer festival a few years back. Always popular ale along with their Twitchell, Polar Star comes in at 4.4% delicious blonde ale, very hoppy and citrusy and very nice, lovely and clear.
That was it, time to go home, but we still had time pop into the Cuckoo at Toddington. Pharp managed one more, he went for the house beer brewed by Leighton Buzzard brewery, and the ale is imaginatively called Cuckoo Ale, 3.9% copper coloured looked ok, Pharp didn’t complain.  Fuggles and Citra had Gun Dog brewery’s Jack Spaniel, yet another blonde ale, just 3.8% but a lovely fresh tasting ale. Almost enough ale for the day, just one more for Fuggles and Citra, this time it was Slater’s Top Totty, more blonde ale we’ve had quite a few today. 4.0% quite hoppy and grapefruity, just right to wrap the day up nicely. So home we went arriving back into Kettering around 7:30pm and good news, Fuggles couldn’t hear any cats singing.