Well that’s all the festivities done with, ate too much, drank too much and spent far too much. Still, looking forward to turkey curry for the next 2 months. Its New Year’s Day plus one and instead of traipsing up to Latimer Park to sit in the bar doing nothing we’re off to the home of Baron Silas Greenback in Bedworth. But first the PRATS have a tour of micro-breweries to undertake. It’s around 11:15 am when Parker and the gruesome twosome (Pharp and Citra) arrive at Chez Fuggles. 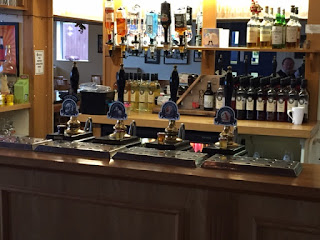 Just an hour’s drive listening to Pharp telling us about his new kitchen; which is on target for being the longest ever installation project of all time and still no splash backs. (It is assumed he was referring to the kitchen when he started talking about splash backs) We parked up at the Church End brewery just a few miles north of Nuneaton in the village of Ridge Lane. With 8 of their own ales available: Rein Beer, Goat's Milk, Grave Digger's ale, What The Fox's Hat, Vicar's Ruin, Silent Night, Fallen Angel, Rest In Peace, it’s a struggle to know where to start, however, Citra soon spots an ale he first tried on our trip to Leamington early on in the season. Goat’s Milk, he had a supercilious grin on his face then and it was no different this time around, Fuggles also had this fine pale ale, at 3.8% a lovely citrusy pint to kick the day off nicely. Pharp sampled the dark red Grave Digger’s ale, 3.8% chocolate and roasted flavours whilst Parker went for Silent Night, a nutty brown ale rich and smooth at a premium bitter strength of 4.5%.  As you might expect at the brewery tap all ales were in superb condition, perfectly clear, with a good tight head which remained right down to the bottom of the glass. By now the snacks had arrived on the bar, home-made pasties, scotch eggs and more importantly pork pies. Well we say home-made these delights are produced by the chef at the nearby Church End owned pub the George and Dragon at Stoke Golding. Needless to say we had a couple of pies and very nice they were too, although Fuggles prefers a tad more peppery taste. Also available are a couple of locally produced cheeses, with a favourite Sparkenhoe Red Leicester one of them, a marvellous proper flavoursome cheese, nothing like the mass produced ear wax which is often labelled as Red Leicester, proper craggy and tasty cheese. Time for another beer, this time Fuggles and Citra went for What The Foxes Hat, had this a few times and it never fails to be nothing other than a fine quality ale, 4.2% and a very tasty golden ale and of course in good nick. Pharp had a Silent Night. It was time to move on, as we were leaving the Weebles arrived, they could be tailing us today. 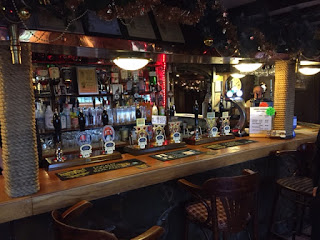 Just a 3 mile drive and we arrived at the Lord Neslon Inn at Ansley, also just north of Nuneaton, home of the Sperrin brewery. We were greeted by another array of hand-pumps 9 in total, with 5 Sperrin Ale available, Ansley Mild, Head Hunter, Band of Brothers, Third Party & Thick as Thieves. Plus 2 guest ales, Oakhams Bishop’s Farewell and Burton Bridge’s Stairway To Heaven, 2 pumps had nothing on them.  Citra and Fuggles had Band Of Brothers, very nice although Citra’s was probably the last one out of the barrel has it had a very slight haze whereas Fuggles was perfectly clear.  4.2% golden ale quite hoppy, very nice with a good head. Pharp went for Head Hunter an amber ale at 3.8% nice and clear a good session ale with a tight head. Chadwick’s pork pies were on the menu so we went for a pork and stilton and very good it was too, very peppery with reasonably strong stilton coming through. Parker wasn’t impressed as he doesn’t like stilton so more for us. Parker just sipped on his coffee. Next up for Citra and Fuggles was Third Party, a 4.8% robust ruby coloured ale, malty and bitter and very nice indeed, however, the first pints were as thick as pudding so the barrel was changed, thankfully the second batch was perfect. Pharp had another pint but we’ve forgotten which one it was, getting old! By now the Weebles had arrived shortly followed by Vlad and Bluesbird, making up to 10 Poppies faithful going out of their way to sample some decent ales. The Pork pies were proving to be very popular as well. The barman offered to show us around the brewery but unfortunately time was against us, maybe next time.
It was time to move onto the Oval, just 15 minutes away, Bedworth play on a 3G pitch so games postponed due to bad weather are very unlikely, we definitely would not have played at Latimer Park. The game was played through persistent rain, a very large Poppies gathering making their voices heard, mostly berating the referee, questioning his parentage on quite a few occasions. His haircut also got a mention from a very vociferous Pharp. Most supporters were content to let him vent as much hot air as possible, which considering all things is a rarity. The Poppies goalie decided to rugby tackle the Greenbacks centre forward, an ex-poppy, the resulting penalty was duly despatched. A second half which saw the Poppies parked up in the Greenbacks half finally bore fruit late on to earn the mighty red machine a well-earned point, time to go home.

But not before we frequented out third brewery tap of the day. It was just after 5:00pm when we arrived at the Woodfarm Brewery with just a couple of punters in the bar. 10 minutes later, the Poppies horde had invaded the place, well 14 of us anyway. They had just 4 of their own ales available, Best Bitter, Victorious, No8 and Scrum, although the board suggested Webb Ellis was available but to Citra’s disappointment it wasn’t.  It was Best Bitter for Fuggles and Citra, Victorious for Pharp and a giant cup of Columbian for Parker. The beers were in good condition, nice and clear, we’ve been here a few times now so know these ales very well. Best Bitter is a nice clean ale coming in at 4.2%, golden and citrusy. Victorious is a dark amber also 4.2% with a malty palate a good standard ale. Citra and Fuggles finished off with No8, a powerful 5.0% hoppy ale with a malty finish. All very nice but time to go home, Pharp is going to a Pizza party. 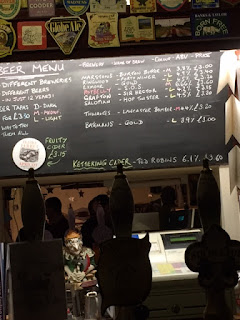 It was around 6:35pm when we arrived back into Kettering, Citra & Fuggles decided to pop into the Alexandra Arms, whilst Pharp and Parker went home. Delight of delights, Salopian Hop Twister was available, so we both had a pint. This is a beauty, a mouthful of lemony grapefruit with a lovely dry finish coming in at 4.5%, so good Citra had another, Fuggles followed up with Grafton Breweries Sir Hector at 4.2% a lovely pale ale with loads of hops. That was it for Fuggles as Mrs Fuggles had arrived to wrap the day up. However, Citra stayed around for a while, he later texted Fuggles that Oakham Citra had just come on, I guess he hung around a bit longer. All in all an excellent day out, 3 micro-breweries, 2 pork pies, the Alex and a point at the Greenbacks. Lovely!