It was just after 4:15pm when the Pharpless PRATS set out to bright lights of Redditch, gateway to enlightenment and illumination. Worcestershire’s centre of excellence for cultural growth especially mushrooms. The Bee Gees were singing a song about Massachusetts on the radio. It wasn’t long after 5:30pm when we started to meander around the town centre looking for a suitable parking space close to our first supping station Black Tap Brewpub. 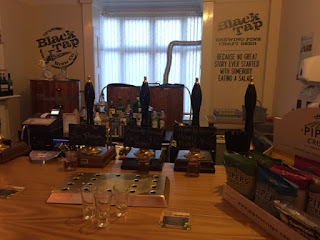 Eventually, we got into the pub, an old building with high ceilings; a raging fire was being hugged by three locals chatting away with very broad accents. It was probably a Georgian house in its earlier days then becoming offices or a dentist’s surgery, now a pub brewing its own beer. Behind the bar is the brewing area with all the tanks and pipes and suchlike. The young lady behind the bar pulled us a sample of the three ales, all reasonably pleasant. They only had one of their own ales available which was a tad disappointing. Citra and Fuggles went for it Blacktap’s Bon Johnsom, the young lady behind the bar offered us a loyalty card; we chuckled saying we were only here for the day and unlikely to returning any time soon. The ale was slightly hazy golden ale at 4.2%, but with a good head and tasted reasonable but not perfect. These were probably the last two pints out of the barrel as 5 minutes later the girl behind the bar was heaving away on the hand pump. The next customer’s ale was perfectly clear. 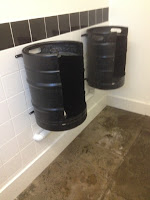 Some interesting urinals in the gents, they had been fashioned out of lager kegs, very amusing. We had studied the on-line menu before arriving so eagerly ordered the 3 times champion pork pie and as it was before 6:00pm we requested the BOGOF deal. Sadly they only had one pie; they no longer served the champion pies just some they purchase off the market. We had the one pie and as we were a touch esurient we went for the fresh scotch eggs. Sadly they don’t do them anymore; not enough demand apparently, the onset of malnutrition was now a grave possibility. Fortunately the young lady rustled up the cheese board; however, they’d run out of crackers. So the three of us tucked into a single quartered pork pie, a dozen cubes of various fromage, some pickle and a small bowl of olives, a feast to behold. Parker enjoyed his cafeteria coffee, nice. The next ale was another new brewery for us Ambridge Brewery Best bitter, another slightly hazy golden bitter, coming in at 4.1%, once again a tight head and quite tasty and refreshing. This was quickly followed by the second Ambridge ale Honey Bunny, lovely 4.2% pale ale with a long honey finish, quite tasty. By now a small contingent of Weebles had arrived, Petit Chemise and Marshall, they both went for Blacktap’s Bon Johnsom and it looked superb. It was time to make our way to the ground. We arrived reasonably early and were able to get parked up. As we passed through the turnstiles the lights went dim, then bright them dim again, everyone laughed it off. So we had a nice cup of tea waiting for kick off when half the lights went out, greeted by a small groan from the gathering throng. One or two people started to run about in a panicky sort of way, holding their I-phone up in torch mode, a few more minutes later and we were plunged into darkness, this time the groans were quite audible, one bloke mentioned botox, or at least it sounded like that. The whole place looked a bit like a peace rally with most people holding up their phones in torch mode, although they weren’t chanting messages of love and peace, balderdash and bother was more the tone. Then some lights came on with a lot of alarms ringing, then off again, then on again with more alarms ringing, but alas two floodlights pylons never did regain their glow and so, this, our third attempt to play this sodding game was called off. The omens had been hinting all night that that we would be back here again. 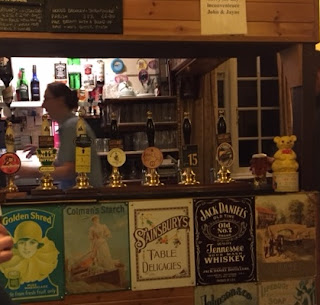 Undeterred, the PRATS, this time with Pharp in tow moved on to the Weighbridge in Alvechurch closely followed by Petit Chemise and Marshall. What a delightful pub this is, sitting by the marina, the local entertainment group were practising in the logia at the back of the pub. This is a three small roomed pub; breweriana adorning the walls, plus a few photos of canal barges and steam trains, the station is just a few hundred yards away. Seven hand pumps graced the small bar, 6 ales and one cider. The bar staff proudly informed us what ale or type of ale always appeared on which hand-pump. Available was Kinver Brewery Bargee Bitter, brewed especially for the Weighbridge, Weatheroak Timmerman Tipple, XT Brewery’s 15, Gloucester Brewery Ankle Tap, Hobsons Champion Mild and Wye Valley Bitter. Citra, Fuggles and Marshall went for Weatheroak Timmermans Tipple, a lovely 3.5% pale ale, quite refreshing and very drinkable, perfectly clear with a good tight head. Pharp chose the Ankle tap, brewed for the rugby world cup, amber ale coming in at 3.8% quite bitter and in excellent condition. We ordered a couple of pork pies, no shortage this time as the bar staff brought out a huge plateful piled high. These were very nice pies, crusty with hardly any jelly and a good peppery aftertaste, very nice indeed. Chemise tried the Kinver Bargee’s bitter, loads of flavour, 4.1% golden ale. So nice Fuggles and Citra finished the night on this one, easily drinkable quaffing ale. Marshall had a pint of the Champion Mild, once again in good nick. Pharp ended then night on Wye Valley bitter.


Although we didn’t get a game to see we did have a good night out, some decent ale in a couple of very nice pubs. We will get to use the loyalty card at the Blacktap, and you never know it could be fourth time lucky. When the hell will we play this game, looks like a 4 match week coming up before the end of the season?