LILYWHITES GET STUCK IN THE MUD

It was a misty start to the day as we left ‘Ketrin’ just after 11:00am, clear evidence of heavy rainfall was there for all to see, the Nene at Irthlingborough has burst its banks with huge lakes stretching away as far as the eye could see. We gathered up Pharp and were in St Ives just after midday; the river flood plains were working well and had taken up the swelling Great Ouse to an even greater expanse. We parked up easily and took the short, brisk trudge to the Oliver Cromwell. 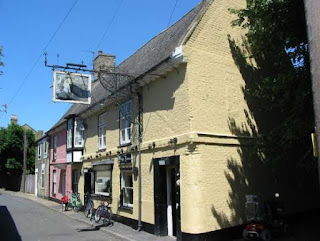 Good news the Oakham JHB was on special offer at £2.50 a pint, lovely. Citra and Fuggles opened up with this and as with most Oakham ales it was incredibly clear, pristine in fact and tasted delightful. This is always popular very pale ale and has won many accolades in the beer world. At just 3.9% a good mouthful of grapefruit zapping across the taste buds, a tight head clinging tightly all the way down the glass. Pharp went for Brass Castle brewery Cliffhanger, slightly hazy single hop bitter coming in at 3.8% with a citrusy taste. It was ok, but not perfect. By now the Weebles had arrived, closely followed by the Cassocks who live close by in Cambridge, Marshall’s family, although considerably less noisy. Marshall was drinking Grainstore 1050, it is suggested that this is in fact a facsimile of the original Ruddles County; the Grainstore brewer once did the brewing for Ruddles in Langham before they were gobbled up by Watney owners Grand Metrolpolitan. Enough said about that debacle. 1050 is a rich full flavoured ale, a delightful chestnut colour, coming in at 5% and was in good condition. 1050 name refers to specific gravity of the beer, the method of measuring the strength of ale before ABV was used. Specific gravity was also the measure of how much was paid to the taxman. It looked so good Pharp went for this for his next tipple, Fuggles and Citra stayed on JHB. It was time to move on to the next pub.  A gentle stroll along the river bank, the sun had burnt all the mist away and we were looking forward to watching a game without wearing a heavy coat, scarf and gloves. 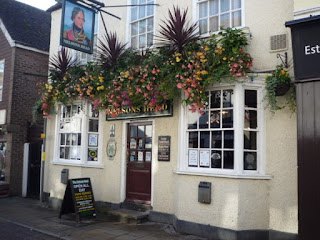 We arrived at the Nelsons Head, owned by Greene King so naturally they had a goods selection of their own ales. But not for the PRATS, we all went for Nene Valley breweries Jim’s Little Brother, nice refreshing pale ale coming in at 3.8% and was in excellent condition. There were now several Poppies supporters in the pub, McGinty’s Goat arrived with Bilbo Baggins and Statto. With our parking ticket timer running down we had just over half an hour to get to the next pub and sling one more down. 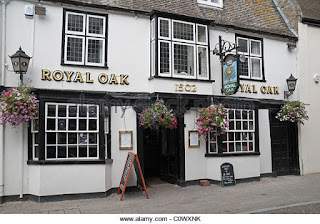 Just a very short walk to the Royal Oak, around the corner. This is a very nice pub; one for the locals, several rooms but most importantly loads of ales to choose from as well as 6 ciders. Oakham Inferno was available so it was inevitable we would go for this. Yet another citrusy pale ale from Oakham, 4.2% easy drinking and in good nick. The pub was now filling up with Poppies supporters, Weebles, Cassocks, McGinty and pals. Marshall is always drawn to dark rich porters so with probably the best porter in the country, if not the planet available; Elland 1872 it was a forgone conclusion what he’d be going around the pub telling everyone about it and letting them have a sip. 6.5% of drinking chocolate, bitter and incredibly tasty. This Porter has won national champion ale on numerous occasions. 1872, where have we seen the date before? That was it for our pre-match supping; it was time to move onto Westwood Rd, home of landlords St Ives FC and tenants Cambridge City. A pleasant enough ground, the car park was already full, either a decent crowd or the leisure centre was very busy or maybe both.

The game, well we won again. That’s now 3 of our last away 4 games with only the debacle at Histon spoiling the fun. We were one up inside a minute, 4 up at half-time. The Poppies Choral Society was in full, well lubricated voice, Gareth Malone would have been impressed. Their tone, pitch and complete grasp of the ironic verse were there for all to enjoy. ML duly waved when beckoned, although I didn’t notice how many fingers he held up! We are now on a role, can we make the play-offs. With no away games for 4 weeks, only 7 home games we must have an opportunity.
A quick pint after the game in the clubhouse, this time a bottle of Ringwood Boondoggle, very nice, we had a pint of this a few weeks back in the Fox Inn, Thrapston on our way back from the debacle. 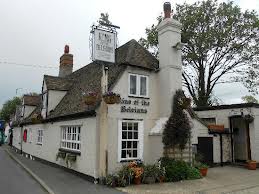 Less than 10 minutes away we arrived at King-of-the-Belgians, in the village of Hartford on the outskirts of Huntingdon. What a delightful pub, we initially went into what appeared to be the lounge-cum-restaurant area, not a soul in the place just a bloke behind the bar. He said are you eating, if not you need to go into the bar, so we did and it was absolutely packed to the rafters. Everyone was watching the rugger with England doing their damnedest to throw away an unassailable lead. Twickenham was equally packed to the rafters but most within clenching their collective buttocks, phew that was close; once again England swung low and almost stayed there. It was a good job the KOB as it is known in these parts had a few decent ales on tap. The Weebles and the Cassocks had already taken up residence in the bar and it was clear Marshall was on another dark ale this time Castle Rock’s Black Gold. It was standing room only for the PRATS. Pharp stayed with the rugger theme and went for Tydd Steam brewery Sweet Chariot, 4.0% pale ale in good nick with a tight head, Pharp looked content and fortunately for all in the pub was emulating those buttock clenchers at Twickers. Fuggles and Citra tried the York Brewery Otherside IPA, what a beauty, we might have to get this for the Poppies Beer Festival. We certainly chose a good beer, full of flavour and in very good condition, 4.5% premium pale ale, marvellous. Next up, Pharp had another Sweet Chariot, whilst Citra and Fuggles had to try the Oakham Beermonster, 4.8% amber ale; this is a seasonal ale from Oakham and is only available during March, so if we miss it now we’ll have to wait for another year. It was packed with flavour, loads of hops, a bit overpowering to be honest but nevertheless a decent ale. The barman gave Parker a free coffee, what a nice pub, thinking about drivers. Just time for one more ale so Citra and Fuggles had to return back to the delightful Otherside IPA.  Well that’s it for a while no away games until April 9th when we travel down to Chesham. That’s it for a few weeks from PRATS.