A KICK IN THE GENERALS

A tough game today away to Chesham United who have one of the best home records this season. It was just after 9:00am when we left Kettering to collect Pharp, when he got into the PRATSmobile he was hugging a bottle of Gaviscon, was this good or bad news and was Pharp fermenting inside?  Undaunted we arrived at Malt Brewery just before 11:00am, a delightful establishment buried in the Chilterns. 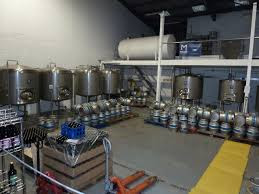 The taproom is adjacent to the brewing and packing area and is quite cold despite the lovely weather outside. The bar person was keen to show off a new beer that had been brewed since our last visit in January so several small sample glasses were filled with a deep brown brew named Malt Icknield. Being pale ale lovers Citra and Fuggles reluctantly sipped a drop, wow, this was incredible, but more about this later. Pharp went for Starry Nights, a chestnut coloured ale coming in at 4.0%, and it was in good nick, very clear with a good tight head. Citra and Fuggles open their account with Missenden Pale Ale, easy drinking, light amber, session ale, coming in at 3.6%, we expect to have this at the Poppies beer festival in May. Next up Pharp tried the Prestwood’s Best, light chestnut ale and once again in perfect condition with hints of caramel. Fuggles and Citra decided to go for the Malt Icknield, what an incredible brown ale this is, styled on a London Porter and bursting with flavour, roasted chocolatey malts and plenty of hoppy bitterness, beautiful, coming in at premium strength 4.5%, massive aroma greets you just before your dive in. We were planning to have Prestwood’s Best at our festival but we may have to have a rethink. Our Beer festivals nearly always sell out of the lighter ales with loads of darker ales left over and then poured down the drain, but this delightful ale will go down very well with the discerning Poppies ale drinkers, so it looks as though we’ll be taking the Missenden Pale and the Malt Icknield for our beer bash. So good Citra had another one, whilst Fuggles went for the stronger 5.0% IPA, rich and smooth amber ale, very tasty indeed. All the ales were in perfect condition and well presented. We are looking forward to returning back down here to collect our festival ales in 4 weeks’ time; needless to say we will also be looking forward to taking the empties back. It was time to move on into Chesham, so after a 15 minute drive we were parked up by the ground and set out on a 500 metre route march into the town centre with the Red Squirrel owned Chesham Brewery shop our destination. 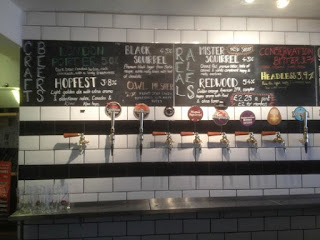 This is a pleasant little place, outside are a few tables and chairs within a forecourt, with a canopy ready to be pulled out when the weather is a tad inclement, all very continental. We were the first ones in there. A small shop-like building with racking for bottled beer from around the world. A couple of church pew type seated areas in the shop windows. There was a bar area in the corner with a row of taps poking through the wooden wall type structure, with a chalk boards above the taps describing the ales. Pharp went for Mister Squirrel, a 4.3% premium ale, Pharp had a sip, his face contorted, we weren’t sure if the beer was rank or he needed to take a swig from his Gaviscon. He wasn’t entirely happy, there was a very slight haze but the head looked tight. Fuggles and Citra decided to sample the delightfully named Hopfest, oh dear. This ale was extremely cloudy and that is being kind. We pointed this out to the young ladies behind the bar; they just said the beer in unfined. What this means is that the brewers do not add finings ‘isinglass’ is a substance produced from the swim bladder of the sturgeon fish and is used to clear the ale. This of course makes ales unsuitable for Vegans. Whilst I appreciate this is supposed to be a craft beer brewery product, this ale was neither good to look at or nice on the palate, instantly fobbing and fizzing, it was just a yellowy/orange looking sludge, quite unpleasant. Pharp commented “clearly the bar staff haven’t got the foggiest’, to which Citra countered “clearly they have as they have just served us 2 pints of it”. The Weebles arrived and we were able to steer them clear of the toxic waste. We didn’t stay for another, one was enough, sorry Red Squirrel we won’t be back, we trudged back to the ground. All this walking had worked up a thirst and thankfully the clubhouse, which was already full of the Poppies faithful, had a couple of ales on hand-pump. We went for the Rebellion Generals, which is probably a standard ale re-badged for Chesham. It was ok but nothing to write about, so I won’t.

The game, well what can I say, the team sheet suggested we were either resting a lot of players in preparation for 7 matches in a chaotic 15 days or we were carrying quite a few knocks. With Chesham having one of the best home records this season, we were in for a very tough time, or so we thought. Within 15 minutes the club’s infant 16 year old had set up one goal and scored another, finally running out 3 nil winners. Quite a stunning and most unexpected result, we are now daring to believe.


Time to start the journey home; we decided to venture through a heavy hailstorm up towards Aylesbury and an old favourite the Hop Pole. 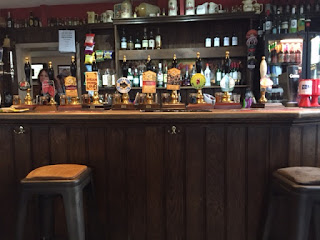 We’ve been here a few times now when watching the Poppies take on Aylesbury’s Moles. This is a great pub with an impressive row of 10 hand-pumps, 9 ales and a cider. At the rear of the pub is the Aylesbury Brewery sister of the Vale Brewery. Needless to say there were quite a few of their ales available, Fuggles and Citra went for the Vale Best, a light coppered coloured, hoppy, session ale coming in at 3.6%. It was in excellent condition, perfectly clear with the head clinging to the glass all the way to the bottom. Pharp went away from the house ales and tried Welsh brewery, Monty’s Moonrise, a 4.0% malty amber ale. It looked in good nick, Pharp certainly wasn’t complaining. Time for another, Pharp stayed with Moonrise whilst Fuggles and Citra went for another house beer, this time Gravitas, a strong 4.8% pale ale, quite citrusy with a dry finish, once again in very good condition. Just enough time for one last pint for Citra and Fuggles, this time we Lymestone Brewery’s Ein-Stein a powerful 5.0% blonde ale, quite hoppy and refreshing a decent ale to finish a decent day off nicely. Three more home games now before we go off to Redditch one again a week on Monday. It could be an interesting few weeks.