ONE FOR SORROW
It’s an early start leaving Kettering around 8:30am. Today we are without Parker, so we are travelling in the Pharp machine with its built-in methane fuelled boosters.  We are joined today by Bogsnorkle making his second trip of the season, although his first experience being in a confined space with Pharp. As it was a long journey back down to Dorset for the third time we stopped off for a fry up at the Little Chef. They say a man is what he eats, so it will come as no surprise to learn that we all went for the Olympic breakfast. The down side of this is that baked beans were included; this on top of last night’s mushy peas, Pharp was potentially volatile. Half an hour later and we were on our way to the first supping session. 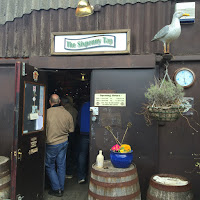 We arrived at the Wayland Sixpenny brewery, located in the middle of a farm yard. The Weebles were already downing their second pint, in the incredibly small taproom only about 8 foot square. There were 9 punters already leaning against the walls when the PRATS all piled in. Fuggles ordered 3 pints of Sixpenny Gold, from the back Pharp asked if they sold Doombar, within an instant a very loud hooter was sounded. That was the first £1 in the swear box, I tried to explain that we don’t like Bloody Doombar, again the hooter sounded, that was another £2 in the swear box.  Then before we had a chance to pay for our beers, Pharp’s phone rang, off the hooter went yet again and yet another £1. So we are already £4 down and we haven’t paid for our beer yet. In the end Pharp had a pint of 6d Best; needless to say we kept very quiet for the next few minutes. The Gold was a delightful gold coloured ale and quite refreshing at 4.2%, with a hint of citrus, very nice and in good condition. The 6d Best is a fairly typical session ale rich amber coloured with a strength of 3.8%, hints of hops and malt were well balanced. Pharp’s internal system was now ready, fully primed to unleash it on the unsuspecting locals. A volley of rasping perps continued unrelenting to shatter the peace and quiet of the farmyard ambience. The locals were ducking for cover, they didn’t have the courage to come up for air to sound the hooter, it would have been drowned out anyway. After about five minutes things settled down. Pharp was popping a few pills, Citra asked what sort of pills they were, to which Pharp replied, “they are anti-inflammatory pills”, to which Citra countered, “does that prevent you from setting fire to your underpants?”, which roused much chortling from the locals. Next up, everyone went for the same again, except Fuggles who tried the Sixpenny IPA, it was ok, quite sweet, very much like drinking barley sugars sweets. A slight haze coming in at 5.2%. There was another Sixpenny ale on the bar Cranbourne Chaser but no one had that. The hand pumps were quite intriguing; the pump clips were all on the wrong pump. If you pointed to a pump clip of the ale you wanted they pulled an entirely different pump, bizarre, but the locals loved it. This is a very nice set up, small and unassuming. Very rustic, and would look forward to coming back here sometime in the future, however, they are moving to new premises in due course, so maybe not. Time to move on, we left the Weebles there and moved on to Dorchester. 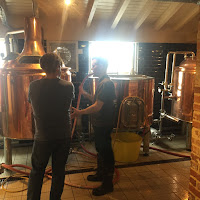 It was around 1:15pm when we parked up opposite the Brewhouse & Kitchen , which is part of a growing chain of pubs, they have a nine at the moment with three more opening this year, mostly scattered across southern England. They brew on the premises and serve what looks like very wholesome snaffle. They had 4 of their own ales on pump. Fuggles, Citra and Bogsnorkle all started on the B&K Nine Stones, named after a ring of Bronze Age stones just up the road near Winterbourne Abbas. A Very pleasant blonde ale, quite hoppy coming in at a session ale strength of 3.8%, it was in very good condition, considering the brewery was about 5 yards away from where we were sitting it is only to be expected. Pharp sampled the Stationmaster’s Ale; you could drink this all day and never get inebriated, just 3.2% golden ale, fairly typical super session ale. It was very clear with a very tight head. One or two Poppies supporters had now arrived in the bar. The next ale was Judge Jefferies, named after a chap that’s used to hang around these parts. JJ is a tasty blonde, single hop, strong ale, coming in at 5.0%, very nice and in excellent condition. That was it, time for some footy.


Avenue Stadium home of the Magpies is a very nice set up, built next to Tesco and is owned by the Duchy of Cornwall, nice one Charlie. During the last 45 minutes of our last match we scored 7 goals; we continued in this style and were 2 up within 15 minutes, 9 goals in 60 minutes, marvellous. It was 3-1 by half time and finished 4-1. A good day at the office, unfortunately, other results didn’t go our way so we’ll be plying our trade again in this league. Time to go home, but not before we had a good end of season session at the Towcester Mill a favourite hostelry for the PRATS, 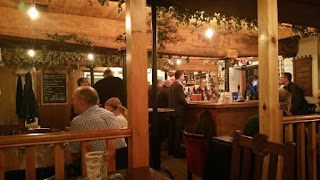 Pharp opened up with Towcester Bell Ringer, a golden 4.4% ale and as you would expect in excellent condition. The rest of us went for Towcester Mill Race, a blond ale, coming in at 3.9% very citrusy with grapefruit finish. Next up, Bogsnorkle and Citra stayed with the same whilst Fuggles sampled Whittlebury brewery’s (former name of Towcester Brewery) Blue Eyed Dragon, it looks as though they are resurrecting some old ales. This was a decent blond ale coming in at 4.0%, quite hoppy and bitter, very refreshing. I don’t think we were planning a session but the ales kept flowing. Next up for Fuggles was Nobby’s Brewery Swift Nick, 4.2% best bitter, quite tasty pale ale, triple hopped, decent refreshing ale. The others stayed with what they’d already been supping. Two packets of Black Country pork scratchings, described as ‘real’. They were authentic; they still had bristles on them, very crunchy and salty and thirst inducing. Another ale for Fuggles, Charnwood brewery’s Outback brewed with Australian hops, a delightfully refreshing 4.0% straw coloured ale. Very easy drinking, it went down quite quickly. Clearly impressed Citra and Bogsnorkel had one of these next time around as did Fuggles. That was enough ale for one day; it was close to 10:30pm when we got back to Kettering. A decent day out, the Poppies won, 3 brewery taps in one trip not bad really. One more game this season, the county cup final being played at Northampton Town ground against a newish club that play in Wellingborough.