IT'S A SMALL WORLD BERNARD BENNETT

Today a couple of PRATS frequented Posh-fest, the Peterborough Beer Festival, one of the biggest festivals in the country.
Hog swillers travel from all over the country, flocking from miles away just to be there. Being a big ale festival it gets very busy, so busy in fact, that tables and chairs become a valued commodity. If you don’t get a chair, you could be standing about for hours. However, the PRATS have a plan.  After getting through the very busy gates, Citra goes for the glasses and I, Fuggles, sprint towards the far end of the enormous marquee, for this is where we might find a piece of buttock resting furniture.  Finding a place to sit is a mighty challenge, passing through the first tent there was no luck. Then, in the distance, a table and chairs are spotted.
The festival opened at 12:00 noon. It is now one Nano-second past, so not many places remaining to park one’s backside. Both Usain and Justin train at Posh-fest to hone their sprinting skills. Fortunately, Fuggles is in pristine condition; whoosh, in nothing more than a blur, Fuggles is enquiring into the availability of the 3 chairs around a table. Fortunately the two blokes sitting there looked at Fuggles with a gormless gaze and clearly hadn’t got the foggiest idea. Buttocks were duly planted; with another chair tucked under Fuggles arm for Citra.
In due course, Citra arrived with the first, of what would prove to be many golden-citrusy pale ales.  We chatted with the two blokes that had perched on our table one pico-second before us. It transpired that they live in the Bournemouth/Poole area; naturally we chatted about our recent trip down that neck of the woods. By now we knew their names Keith and Gordon.
Several ales later, I mentioned PRATS and Kettering Town FC. Then Keith asked “Did you know Bernard Bennett”? Stunned, we naturally said yes, of course, all Poppies fans knew Bernard. It transpired that Keith used to own and run the Norwich House in Bournemouth, (a B & B where Bernard stayed when visiting his brother John). Had there been a feather in close proximity; you could have been used it to smite both myself and Citra. 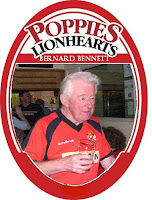 Keith and Gordon often spent many an hour in a pub with Bernard; they described his flimsy tee shirt and shorts, Bernard’s winter wear. They also described their collective trepidation at getting into Bernard’s car.
For many Poppies supporters Bernard is an Icon. It was Bernard who went to the courts in Birmingham in 1989 to plead KTFC’s case, he was successful and we weren’t wound up. It was Bernard that ran The Poppies Travel Club. The priority was never certain, the Poppies day out at numerous real ale pubs on route or the game itself.


I promised to email some photos and stories of Bernard and his life to Keith and Gordon, so if you have something please email them to pratsktfc@btinternet.com. Thanks.