Leamington,
Our evening out at Lockheed, AP or whatever they’re called these days, Leamington started mid-afternoon, Mrs Fuggles ferried Citra and I to our rendezvous point. Parker was scooping us up at the Britannia Pub in Northampton. Not a stone’s throw from Poppies HQ, the Britannia sometimes known as office No3, where many important footy decisions are made, should we serve straight or crinkle cut chips in the burger van being the most monumental one. The Britannia is typical Chef and Brewer pub with everything painted pastel green, the doors, the door frames, the window frames, the seats, the bar, and the walls for goodness sake. On the pastel green painted shelves are brightly coloured glass bowls with perfectly stacked pebbles. I imagine the Feng Shui master had a hairy fit when one of the pebbles was positioned upside down. I’ve been to this pub about a dozen times and the choice of ales is almost always disappointing, and today, once again, I wasn’t disappointed at being disappointed. GK IPA, Wadworth’s 6X, Morlands Gold Speckled Hen and Marstons King of Swing. Marstons knock a few decent ales out so we went for it, oh dear! Looked ok, amber colour, clear with a decent head but the taste was a bit wishy washy. One pint was enough; thankfully Parker had arrived in the car park.
For today’s trip we were without Pharp, who was making his own way to Leamington. There was a moment when I burst out in song; Matt Munro was the inspiration. ‘Pharp free, as free as the wind blows’ maybe not.
A quick drive to our first real port of call was in Southam, the Market Tavern is owned by Warwickshire Beer Co. We were greeted by a large blackboard outside proclaiming all hand pulled ales £2.00 a pint. 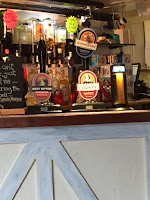 We were looking forward to sampling a nice pint of Godiva, sadly it had just gone off, sod it. The 3 ales still available were Best Bitter, Shakespeare’s County and Kingsmaker. Citra and I went for the Best Bitter, a 3.9% malty bitter, good condition, clear with a loose head clinging to the sides of the glass, quite pleasant. Parker had Shakespeare’s County 3.4%, light coloured ale with a gentle spicy flavour, easy drinking session ale, and very clear with a tight head clinging to the glass. Citra and I sampled the Kingsmaker, powerful 5.5% fruity, malty amber ale, almost like a stronger version of the Best Bitter. A very slight haze with a loose head once again clinging to the glass. A typical town centre pub, looks like it’s mid-way through being redecorated, with whitewash covering the black bits. More suited to manual workers than the shirt and tie brigade. Pleasant staff serving the ales, not a place to take the Mrs, but we will certainly stop here again should we pass this way in the future.
A very short trip to next stop at The Old New Inn, Harbury. The front door is adorned with CAMRA Good Beer Guide stickers, always a good sign.

A pleasant village local, serving Purity Pure Gold, Churchend Goat’s Milk and bloody Sharp’s Doombar. Unusually Parker went for the Purity Pure Gold, not his normal type of tipple, a gold light ale at 3.8%, and brilliantly clear ale with a good tight head, looked superb. Citra had never tried Churchend Goat’s Milk before so I knew he was in for a treat, we both had this, a lovely pale hoppy ale 3.8%, just up our street. I knew Citra was happy with it; he was in a state of complete contentment, sitting back in his chair, arms gently folded with a supercilious grin across his face.  We had to have another. Several more Poppies fans came into the pub, two we’d seen in Poole now have PRATS names, Petit Chemise and Marshall. Petit always buys a tight fitting small Poppies shirt, whereas, Marshall speaks very VERY loudly indeed.
It was time to move onto the New Windmill ground, as we entered the Brakes Bar we spotted a couple of hand-pumps, one had gone off, I think this was Brakes beer, sadly the other was bloody Sharp’s Doombar. I’m not sure what Citra and Parker did for a drink but I went for a cup of tea. The many red and black adorned Poppies fans took great amusement and thought it would be a good idea to take photos of me with a cup of tea in my hand instead of a pint glass, very funny I’m sure.
And so to the game: very entertaining and exciting, unfortunately the Poppies came out on the wrong end of a 3-2 score-line. Any neutrals in the ground would have been impressed by the football for this level. 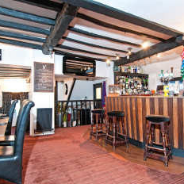 On our home journey we decided to nip to the White Hart in Ufton, smart pub, quite foody with 3 ales available, Slaughterhouse Saddleback, Braksprears Oxford Gold and wait for it, GK IPA. By now there were 9 Poppies fans in the bar and we all went for Slaughterhouse Saddleback, trying the local ale is always a priority for PRATS. The ale was well presented but was a bit lacklustre at 3.9% a fairly standard bitter, it was just about OK.
Now for our relatively short drive home. As we pulled out of the White Hart carpark the satnav said turn right, this did not feel good. As one, we all thought we should go left, back through Southam the way we came. But we trusted the satnav and turned right. Oh dear! After about 20 minutes of country lanes, we finally skirted Rugby and joined the M6 southbound. A giant sign indicating that the M20 junctions 1 to 3 were closed, why did we need to know that? Another mile later as we approached the A14 junction we saw the M20 warning again. Then suddenly we realised the bloody exit onto the A14 was closed. Needless to say several expletives burst forth, Parker had a very tight grip on the steering wheel. We all knew the bloody M20 had a problem but we had no idea about the A14. Parker remained calm and collected, that was until Supertramp came on the radio singing ‘Take the long way home’.  The poor radio took a bit of pounding; I thought Parker was in a piano smashing competition. We travelled home in silence.