It was just after 10:30am when Parker and Citra arrived at Chez Fuggles. After Tuesday night’s magnificent performance we had high hopes of stuffing the Canaries. The early debates were, what pubs are we going to and in what order, by the time we’d scooped up Pharp the plan was clear, we would go to all the pubs starting down in Baldock at the Orange Tree. 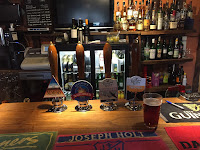 Arriving just before opening at 11:55am we checked the pub door and to our delight it was open and it wasn’t long before we were supping our first of many various ales we would be sampling today. There was a very large list of ales to choose from, three from Morton Ales, a couple from Buntingford, three from Greene King, Sarah Hughes Ruby Mild, Woodforde’s Wherry, St Georges Lazy Days and a couple more that escape my memory. Pharp went for St Georges Lazy Days, 4.1% light golden ale, not the usual stuff Pharp goes for but he liked the name. Always the discerning connoisseur is Pharp.  It looked in good condition with a nice tight head clinging to the glass. Parker and Citra went for Buntingford Twitchell, always a favourite this one, we’ve had it twice at the Poppies annual beer festival and it is always one of the first to be supped dry. Another golden bitter at 3.8%, refreshing ale once again in superb condition and of pristine appearance. Fuggles went for Morton Ales Gregory’s Gold, I’m sure with a bit if imagination you can determine the colour of this ale. 4.1% in strength a dry-hopped bitter delightful taste. So far so good, it was time to have a look at the sausage menu, on offer was traditional Pork, spicy pork, pork and stilton, pork and honey, lamb and mint, one with some ginger in it, another with some leeks and a French Toulouse, lovely. As it was well after mid-day and had been several hours since we’d thrashed through a bowl of Crunchy Nuts, it was clear for all to see that the onset of malnutrition was imminent. Citra looked decidedly peaky; almost ashen in fact, so we ordered our favourite snorkers. Pork and honey for Citra, Spicy Pork for Pharp and Parker, but with Pharp being somewhat esurient he had an egg on top. Whilst Fuggles consumed the delightful Pork and stilton. All very nice, in a baguette and with the obligatory foliage on the side. If I ever come back as something please let it not be a lettuce, how depressing it must be to be a lettuce. It must be somewhere in the region of 95% of all lettuces are thrown into the bin after being no more than decoration around a plate. When was the last time you saw a smiling lettuce, nothing wonderful about being a Webb or a bloody iceberg? I suppose there’s some consolation as one had a Greek island named after it. And so on to more beer, Pharp decided to try a mild, there’s not much better than Greene King’s XX Mild, at 3% Pharp wasn’t going to get inebriated on this. Citra and I went for Morton’s Jelly Roll, named after the jazz musician. I recall a few years back fetching a barrel of Jelly Roll from the brewery somewhere near Wolverhampton just off the M54, it was a bit of a surprise when I arrived to find a semi-detached house at the address I’d been given, the brewery was in the garage, a very micro-brewery indeed. They have now moved on and have a small 3 barrel plant close by on an Industrial estate, Jolly good. A nice light golden ale at 4.2% just enough citrus to put a smile on Citra’s face, either that or he had wind. Thankfully Pharp was quiet on the wind front, there was still time. That was it for the Orange Tree, a very nice pub, all the ales in good condition, however, the prices are high at around £3.90 a pint and Sarah Hughes selling for £4.20, maybe that’s normal around these parts.
We moved on into Hitchin town centre and parked up in the Asda car park, across the road was the Half Moon. A beer festival was in full swing, we walked to the tented bar at the rear of the pub. A decent selection to choose from but where to start? The green hop beers were beckoning, Citra and I went for Bexley Gushmere Fuggles Pale Ale, well what else did you think I’d drink? Pharp had Caveman Brewery’s Swanscombe Woman.

We ventured up the pub garden to the marquee covered seating area, with a considerable slope, so much so that the glasses were sliding across the table. Nevertheless we persevered for about 15 minutes hanging on tightly to our wandering ale filled glasses. It was also quite damp and chilly outside; eventually we had the inclination to move inside. The Gushmere was delightful 4% bitter with a dry finish with a hint of citrus, in reasonable condition considering it was served direct from the barrel. Pharp likes a mature woman, the Swanscombe lass is around 400,000 years old. The ale is hoppy dark amber ale at 4.2% looked good, Pharp didn’t complain, however, some of the newly arrived Poppies supporters soon had something to moan about. The Weebles had arrived, this band of boozers from Wellingborough consist of Petit Chemise, Marshall, Wort, Betweenthesticks and Cardiac who had recently been fitted his very own metronome. It was within 5 minutes of their arrival when they first experienced Pharp. Cardiac proclaimed “bloody hell Pharp, you’re infamy proceeds you, my god how do the PRATS deal with that week in and week out”? Cardiac was some way off by now has a very large space had opened up around Pharp. We explained to the Weebles that training as pearl divers had allowed us to hold our breath for considerable periods of time. The kafuffle quietened down after a few pungent minutes and the group were able to chat normally again albeit in a husky voice.  It was time to whet the larynx  again, this time Pharp went for Woodforde’s Nelson’s Revenge, most of us thought Montezuma would have been more appropriate under the circumstances. Nelsons Revenge is a premium malty ale coming in at 4.5%. Looked in very good condition was drawn by hand-pump at the bar. There was now a few more Poppies supporters in the bar, clearly contributing to the Hitchin economy. Citra returned to the ‘bar in the tent’ and came back with a supercilious  grin on his face, he was clearly pleased with his selection, Deeply Vale Citra Storm What else could he possibly choose, first beer had Fuggles in the name; he had to get something with Citra in the name. What a beauty, at 4% a pint of grapefruit and lemon pale ale session ale, it was in good nick could have stayed and had a couple of more of these but it was time to go to the game.

The Canary clubhouse has two ales on tap, Fuller’s London Pride and Youngs London Gold. Pharp went for LP and Citra and I had LG, they were ok, these ales are so readily available around the country they get a bit boring. The beer was in good condition, nothing more to say really.
The game, well Tweety Pie came out of his cage for the first 5 minutes from then on we controlled the game that was until the last 15 minutes when we spluttered like Sylvester the cat and decided to have a nap. Oh dear. 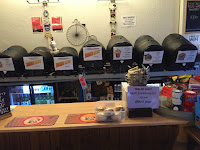 Onto the Old Transporter in Henlow Camp, a converted shop next to a Tandoori take away, nice! A few tables and chairs, all different, scattered around the one room hostelry. The eight barrels were all racked up at the back of the bar, with just 4 available. As a lover of all things from Greenjack brewery it was inevitable that Citra and I went for Waxwing. A refreshing pale session ale coming in at 3.9% lovely. Pharp tried Loddon Russet, we had this on Tuesday in Biggleswade, and both ales were in good condition, very clear with a decent head, not overly tight but the head hung around until the glass was empty. Drivers are given a free drink so Parker had a coke, good on them. The Weebles arrived after going further up the road to our next destination the Engineers Arms, but not yet we had another beer first. I went for Springhead Barebones, Citra stayed with Waxwing, Pharp had Ampthill IPA. Barebones is a premium amber ale at 4.7%, hoppy with a dry finish, once again beautifully clear with a good head. Pharp’s Ampthill IPA, at 4.5%. I’ve always had a gripe when an IPA (Indian Pale Ale) is less than 5.5%, nevertheless, this looked fine, by now the long day was taking its toll on Pharp and he struggled to get through his ale. It was time to move on. 5 minutes later we arrived at the Engineers arms, and unbeknown to us they were holding a beer festival.

The place was heaving, not a table to be had. Citra and I had a very delightful Blue Bee breweries For’t’ thirst. Best pint we’d had all day right up our street. 4.1% straw coloured hoppy, zesty, marvellous. So good we had two. Pharp had a Hanlon’s Devon Darkness, a rich chocolaty stout. This was one beer too far for Pharp he needed help to finish it off. The day was done, and it was a good one, apart from the footy that is.