WADERS OF THE LOST SPARK

The evening started out with Mrs Fuggles conveying Citra and Fuggles to the Britannia Inn, near where Parker put’s his time in. Already in the bar was Bailiwick Bill guzzling a vin rouge and playing Lode Runner on his laptop, all very important indeed. Bailiwick runs a local sieve company, something to do with mesh. As usual the ales on offer are pretty boring and a St Austell Tribute is the best of a bad lot, it tasted a bit odd but that could be the Strepsil I’d been sucking on just a few minutes earlier. Fuggles has a throat like a Shetland pony, a little hoarse, so even though it tasted like a septic tank it was soothing. It was just after 5:00pm when Parker arrived to take us on our short trip to Biggleswade, Bailiwick went home to cook dinner and change a few nappies whilst listening to the match on Poppies TV radio. Pharp was going to the game straight from work so lucky for us it was plain sailing with no excessive turbulence. 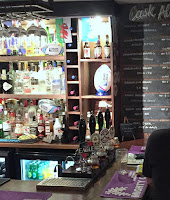 At just after 6:00pm we arrived at our first port of call in the town centre, the New Inn Ale House and Kitchen, a Greene King pub with an excellent selection of ales.  From the GK stable they had, IPA, XX Mild, Abbot Ale and Morlands Original. Additional ales included Elgood’s Insight, Titantic’s Cappuccino Stout, Charles Wells Eagle, and sadly just gone off was Leighton Brewery’s Narrow Gauge being replaced by an ale from the Kettering area, Julian Church’s Lion’s Den. There was also 3 ciders on hand-pump, 11 pumps in total. 4 at one end of the bar and 7 further down. A long pub with several areas with tables and chairs, half way down the bar was a rack of barrels, which were all part of the décor.  We all opened our account with Morlands Original, a pleasant enough ordinary bitter amber in colour at 4%, nothing to write about so I won’t. To be honest it was OK, the beer was in good condition and tasted fine with a nice biscuity finish. I’m not sure what sort of biscuit it was though, maybe a custard cream, definitely not a ginger nut. A few more Poppies supporters entered the pub, Flopper, who is always greeted with the question “did you walk here”.  Flopper walks everywhere, even Mt Everest along with his trusty back pack. Also arriving in the bar was Marshall and Petit Chemise along with Betweenthesticks. I’m not sure what Marshall and BTS had but it was clear Chemise had gone for the Cappuccino Stout, as black as your hat, it certainly looked OK. Chemise had enjoyed it once up in Stoke so had to have it again, keep drinking those and his chemise will no longer be petit. Parker had a glass of ice with a splash of coke, whist Citra and I went for the Lion’s Den. We shouldn’t really drink beer brewed in our own back yard, but we weren’t really interested in any of the others. We did also sneak half of the Elgoods Insight, as its 5.6% we thought we’d give it a try. Insight is a collaborative brew between Elgoods of Wisbech and Insight Brewery in Minnesota in the US of A. The beer was flat, tasted like watered down whisky. Not overly impressed, took some drinking between us but it’s against our principles to leave it. The Lion’s Den was alright, pleasantly bitter toffee flavour, very slightly peppery. 4% it was in decent condition, slight haze, maybe one of the first out of a new barrel. That was it for our pre-match imbibing and so we moved onto the Carlsberg Stadium just over a mile away on the outskirts of town, via Pothole Avenue. Driving up to the stadium was like a car rally over a moonscape.  Still the stadium looked new, although an incredible dearth of advertising boards around the perimeter.  No decent ale in the bar.

The game, well what can I say, we won and it was a Tuesday night, our first victory in the league on a Tuesday night. The Mighty Red Poppies deserved the victory, probably our best performance of the season.  The game was over and with a quick escape we went back into 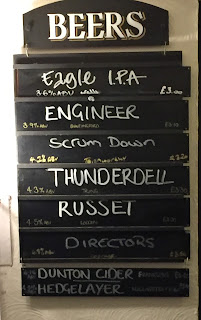 Biggleswade town centre with the Golden Pheasant as our destination. A very good typical town centre pub, with 7 hand-pumps, 6 ales and a cider available. Charles Wells Eagle was once again available; this may be a Wells pub. Buntingford Engineer, Tring Thunderdell, Lodden Russet, Courage Directors and Teignworthy’s Scrum Down, obviously their contribution to the Rugby World Cup collection, yet another wonderful use of imagination by the marketing team. We were now joined by Pharp, who along with Parker went for Engineer. Buntingford ales are always good and this was no exception. In good condition, a session ale coming in at 3.9%. Citra and I went for the Scrum Down, Teignworthy Brewery down in Devon brew some delightful ales so we were looking forward to a tasty treat. One sip and bloody hell, you beauty. The beer was off, even Sarsons would have rejected this. Citra also took a sip and what happened next was a sight to behold. Imagine Michael Jackson going through a three minute dance routine, jerking here and there, moon walking, and his neck thrutching all over the place. Well now imagine all that condensed into three seconds, this was Citra’s reaction. At one point there was a Higgs Boson moment when his forehead and chin collided just in front of his nose. His head shook violently for several seconds after; he was unable to utter any words with any clarity. The beers were handed back to the barman who got the landlord to verify the beer was off. The landlords face was a fitting response. So we moved onto Lodden Russet. It was looking as though we weren’t going to get any pale citrusy ales tonight, soddit. The Russet was ok, the name indicates its colour, a thick head with a bit of oatmeal, reminded me of a typical Scottish ale from a few decades back. 4.5% it didn’t do a lot for me. But to our delight, the ale replacing the rejected vinegar was from Elland Brewery, a pale ale named Sanctuary, New Zealand hops will always give a very citrusy taste, this was lovely, a 4.3% straw coloured ale and in good condition. Nice head clinging to the glass. The night was finishing well. That was it, several decent ales and great result. We didn’t go to the Engineers in Henlow, saving that for Saturday’s trip to Hitchin where a beer festival is being held at the Half Moon. Marvellous.