A DAY OF MIRTH AND BEER

Here we go, the PRATS on the road to the hills and valleys of Cymru. It’s bloody cold, just 2 degrees, winter’s here. Get out the warm clothes, thermal vest, thermal long johns, woolly jumper, scarf, gloves and Paddington bear coat, all sorted.
Parker arrived around 9:00am, Citra and Pharp were on board, I suspect Pharp had already gone through Friday’s food consumption and you can bet your bottom dollar he had mushy peas. There was a buzz in the car with all the new signings, Citra was looking forward to seeing a Brazilian; I wonder what images are going round his head. Just 30 minutes into our journey Pharp was at it, the car windows were down before we could say “you dirty bar….”  Apart from a 15 minutes stationary spell on the M5 our journey to the first pub was quite straightforward, having said that the car windows were kept quite busy, it transpired that Pharp had double mushy peas. As we approached the end of the M50 we could see Ross on Wye on the left, in the foreground was the wide river flowing quite fast after the recent rain and snow. In the far distance we could just make out the snow lying on the hilltops of Wales, all very picturesque.
We’re looking forward to seeing some Welsh flags, especially where the red dragon has been replaced by a symbolic image of Wales’s favourite TV personality Anne Robinson’s ruddy physog, god that’s scary, still maintaining the dragon connection though. We had a short chat about the lovely Anne as we passed through Offa’s Dyke, Citra told us about a story he’d read. Anne was on safari with the family when she was chased down and swallowed whole by an unfussy lion. After a few seconds the lion started to convulse violently and immediately regurgitated Anne completely intact, the bag was let out of the cat.

We arrived at the Bridge Inn LLanfoist at around 11:30am: we were greeted by 4 hand-pumps Wye Brewery’s Dorothy Goodbody Golden Ale, Hancock Brewery’s HB and Wickwar Brewery’s Cotswold Way, with a locally produced cider on the 4th pump. Citra and I went for the Golden Ale whilst Parker and Pharp settled for HB’s. Both ales looked superb, very clear with an inner glow. When ales are as clear as these they seem to draw in all the available light and then reflect it back out again, marvellous. Although both ales were a tad on the cold side they were in good nick and tasted OK but not particularly exceptional. The Golden Ale was 4.2% whilst HB was a gentle 3.6% easy drinking bronze coloured session ale. Pharp and Parker seemed content, with the former having a second pint, Fuggles went for the Cotswold Way ale, whilst Citra preferred another Dorothy Goodbody’s, now there’s a surprise. The Cotswold Way was copper coloured ale coming in at 4.2% it was pleasant enough and once again in excellent condition, not as cold as the previous ales. Malty, slight bitterness, not my sort of ale but for research purposes one has to try these, but it was drinkable. That was it for this pub, very nice and friendly, the landlord remembered us from our previous visit in May, nice to know we’re unforgettable, so onto Merthyr.
The Welsh road signs must be twice the size of any in England; they all have both Welsh and English translations. But what seems strange is why they bother with both languages on some signs, Caernarfon and Caernarvon, FFlint and Flint, they must have plenty of cash in the road signs budget. We English are not so thick we can’t work it out, I wonder where this is Wrecsam? 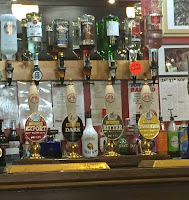 We arrived in Merthyr at around 1:15pm and spend a little while trying to find somewhere to park, eventually ending up in the Tesco car park. A hasty trudge through a shopping arcade, a quick ‘Henry Cooper’ a right followed by a left, then  just in the near distance a large 18 gallon barrel was spotted in a back yard, you don’t see many of those. So we made our way towards it, then realised we were at the back of the intended destination. As we were just about to come out of the yard a Welsh voice chirped up asking if we needed help, we said we were looking for the Winchester, he pointed to the back door and we’d arrived. It turns out that the guy pointing the way is a Director at MTFC along with several others in this bustling pub. The Winchester is owned by the Rhymney Brewery and they had 4 ales on hand-pump. Hobby Horse, Bitter, Dark and Export. Pharp went for Dark whilst Citra and I settled for Hobby Horse a light coloured ale with a strength of 3.8%, reasonably pleasant but not a show stopper. In very good condition with a very tight head clinging to the glass, slight bitterness, slight sweetness, it was OK. Pharp had the Dark, crikey, this has an amazing aroma of rich dark chocolate; I had to have a sip. What an incredible ale, probably classed as a mild, maybe even a stout, but with much more taste than your everyday malty stuff, this had a long lingering taste. This ale had been champion ale of Wales a few years back and you can clearly taste why. Once again in very good condition with a very tight head all the way down the glass. We chatted with the locals in the pub but to be honest it was difficult picking up what was said through their  dialect. Most seemed to be having a bet on the horses and watching the footy on the 3 tellies. A nice little town centre boozer. The locals seemed to be drinking the much stronger Export, so Citra and I had one whilst Pharp had the Bitter, this meant we’d tried all 4 available ales on tap. The Export is a deep amber ale coming in a 5.0% but it was very deceptive and dangerously drinkable. Richer and slightly sweeter than Hobby Horse, very pleasant, easy to see why the locals quaff it down, another very tight head clinging all the way down. The Bitter looked good and was more a premium ale than standard bitter with a strength of 4.5% as with the other ales it was in good condition, Pharp didn’t volunteer to let us have a sip, he must have been quite satisfied and kept it to himself. The price of the beer was just £2.35 a pint, no wonder it’s busy. That was it, time to go to the game, preceded by a swiftly paced route march back to the Tesco’s car park.
We arrived at Penneydarren building site at around 2:30pm, nice friendly people, with clearly a lot of redevelopment going on courtesy of the local council. The facilities will become more of a community establishment; well that’s what the blurb said. Due to open next spring, it should be a very nice complex which includes a year round usage 3G pitch.
The game, well the Poppies came out the traps and looked as though they were going to overwhelm the Martyrs, so it follows that we were 1-0 down shortly after. A good battling 2nd half earnt us a well-deserved point, although waiting until the 94th minute to equalise can be a bit frustrating. When the sun went down it started to get bloody cold, I didn’t want to take my hands and hankie out of my pockets to mop the drips on the end of my nose, but pride got the better of me. The locals weren’t happy giving the officials a bit of stick. There was an ugly moment as the players left the pitch, but best to leave that to others to deal with, time to start for home, via another pub naturally.
Merthyr is the home of Poppies legend Cohen ‘the dribbler’ Griffiths. Cohen is probably the Poppies greatest dribbler of all time and it was caught on the MOTD cameras. Although the way Citra is gawping at the rather voluptuous raven haired Welsh maiden the dribbling crown could be shifting his way. Citra asked “is that what you call a Welsh valley”; referring to the cleavage of course. Calm down Citra, somebody mop his chin. 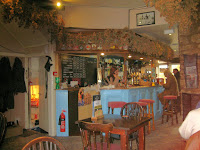 
We had one for the road then that was it for the day, a nice day out although perhaps a tad long, by the time Parker got home he’d been out for 13 and half hours. Unusually Citra wanted to go straight home instead of the Alex; he said we wanted to go see the end of X factor! He wanted to make sure any bits hadn’t fallen out of Rita’s dress; at least I think he said bits.