LITTLE BIDEFORD TEAR LET ME DOWN.

Showing my age with that title, Little Bitty Tear. I thought about going for the more footy terrace related ‘When the Red, Red Robin goes bob bob bobbin along, shoot the b……………..  But hey, soddit, old farts R’us.

It was mid Friday morning when the Fuggles along with Doug the dug, set out on our trek to the West Country. A fairly easy journey to our overnight stop in Weston Super Mare, just one on route stop at the wonderful Farmers Market at Gloucester services on the M5. Our first pub was not the Woolpack in Worle as originally planned we veered off towards the Mendips and on to the edge Sedgemoor passing Thatchers Cider Farm on the way, to the delightful country pub

The Swan in Rowberrow. Owned by Butcombe brewery this quaint stone built pub had 2 largish rooms. We met Fuggles sister Julie and hubby Dave a former Poppies reporter many years ago covering the Atkinson and Dougan eras through to Peter Morris’s first stint, there are a few tales to be heard there. Three ales and a few ciders on offer, obviously Butcombe ales including their bitter and the joint venture with BBC’s Countryfile presenter/farmer Adam Henson’s Rare Breed. Also available was an Oakham Ale Citra, oh the temptation to go for Citra was there, nevertheless, it would go against all the PRATS principles to not go for the local ale, so Rare Breed it was. A lovely amber-pale ale, hoppy, fruity bitter, very refreshing coming in at 3.8% and in very good condition. The Oakham Citra was beckoning and so I succumbed. As with all Oakham ales they are very hoppy and as you would expect with an ale named Citra, it was very citrusy. I just had to text Citra, I knew he would be irritated at not supping one of these himself. If you like your early morning grapefruit juice go for this, you’ll go to work with a satisfied smirk across your face. It was obvious the locals enjoyed the locally made ciders; most of them were swigging cloudy orange coloured stuff. The food was OK, the enormous Dagwood filled a hole. So that was it for the lunchtime, I didn’t have a pint of the house bitter as I was going to another Butcombe put in the evening. So after a few hours chopsing about stuff and drinking copious cups of tea, we went out again this time we were making our way to another Butcombe pub the Lamb in the historical town of Axbridge.

This is a very old coaching inn dating back to 1480 standing opposite King John’s hunting lodge, very nice. A busy pub with many folk returning from a local firework display. Once again a couple of Butcombe ales, the bitter and Haka, plus yet another Oakham ale, Hawse Buckler. There must be a reciprocal agreement going on between Oakham and Butcombe breweries. The Friday night food deal included a pint of Butcombe bitter so that’s where we started. A really good traditional bitter, plenty of flavour, amber colour, hoppy, malty with a dry finish and a little zip at the end. 4.0% Bronze medallist at the 2013 GBBF, delightful especially with steak and chips. Next up was Butcombe Haka, we’d sampled this during our trip to Paulton. Typical New Zealand hop, citrusy, very pale ale, very refreshing, beware at 4.5% strength quite easy drinking. Whilst the others went for pudding I chose the Oakham Hawse Buckler, wow! 5.6% it was like drinking a chocolatey fruit punch and what a punch. An enormous amount of flavour, dark colour with a very tight head and in superb condition. This is a very busy ale with an awful lot going on, it’s difficult to describe it. That was it for the evening; I didn’t need my usual Ovaltine.

It was Saturday morning when we left Weston at around 10:30 amidst reports that the match being on was 50:50, the pitch had taken a considerable amount of rain overnight with standing water everywhere. We arrived in Bideford at around midday, having passed the team coach just a few miles out of town. Sure enough a posse of volunteers were busy forking the pitch; in fact they were forking about all over the pitch. The players arrived soon after looking errrrrr OK. They appeared to be in ‘WFT are we doing here mode’, but nevertheless, jolly. I think that’s the word.
Two advertising boards offered encouragement amongst the Poppies hog-swilling fraternity; one was for Country Life brewery which raised hopes for the clubhouse and the second was for the Appledore Inn, one of the destinations during our pre-kick off ale supping session. 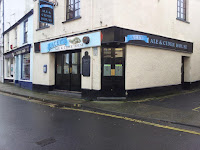 A short stroll and we arrived at Lacey’s Ale and Cider House, from the outside it looked like a converted shop, but once inside the narrow pub opened up. Citra was already there downing his first pint of the weekend, his trip down the night before had been long and quite late arriving in Barnstaple around 11:00pm.  Once in the pub we were greeted by 4 hand-pumps, 3 ales from the Country Life brewery and a cider. The ales were Appledore Bitter, Golden Pig and Reef Break, Citra was on the latter so we followed suit. Nice amber ale coming in at 4.0%, decent enough malty session ale. It was in reasonable condition with a loose head clinging to the glass. By now a couple more Poppies fans arrived in the pub; Poppynet’s Markfleck and his better half Jane, who sampled the cider whilst Mark had the Reef. Citra and I were very much looking forward sampling the Golden Pig; the description suggested it was hoppy, so we ordered a couple. Bugger and balderdash, after pulling just a third of a pint it ran out, with no more down the cellar. Hang on, this is Saturday lunchtime, how can you have no replacement ale, on a Saturday probably one of the busiest days of the week. Fuggles picked up the glass containing the dregs which looked very clear and had a quick sip; it was lovely, very bitter, citrusy. Citra was beckoned over, “try some of this Citra it would have been lovely” I proclaimed. Citra drank the bloody lot, I thought pig by name drank by a pig by nature, greedy bugger; I was looking forward to another sip. We went for another Reef Breaker, oh dear!  This was also nearing the end, it was dry, it was sour and a bit like Madonna, a little tart. We gulped this down quickly and moved to the Appledore Inn, which was just down the road. 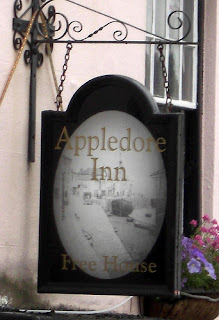 Upon entry we were coaxed away from the seating area by the Thai landlady, we guessed her nationality as they offered Thai food, we’re smart like that us PRATS. We were ushered into the bar area, one glance at the bar and 4 hand-pumps greeted us, two from Sharps including Bloody Doombar and Original, but more interesting was two ales brewed in Bideford. Jollyboat Breweries Grenville’s Renown and Clearwater Breweries Submariner. This was a pleasant surprise; we started off with Gr Gr Gre Grenville’s Renown, delightful malty, fruity hoppy ale, a dark colour coming in at 3.8%. It was in good nick, not Citra or my normal tipple, but it was good condition. More Poppies supporters were now in the pub, Flopper and two friends, plus Tony and his son Jack. It was time to move along the bar, but not too far, not as far as Sharp’s ales, we stopped at the Clearwater’s Submariner. This was more up our street, amber and a decent amount of hoppiness, very nice, coming in around 4.0%. Once again the ale was in good condition with the head clinging nicely to the glass. We were having a good chinwag with the locals, a bit of banter here and there, a very nice pub. You could easily stay here for a good session; however, it was time to move onto the ground. Just as we were leaving Marshall and Petit Chemise loudly arrived in the bar. We arrived at the ground and to our delight they served Country Life’s Appledore bitter, which was very nice, a typical session malty ale coming in at 3.7%, it was in decent condition, marvellous, it’s good to see local footy clubs serving local ales.

The game, well what can I say that is complimentary, errm, we worked hard and that was about it. Awful, woeful, dreadful, hapless, clueless are all adjectives that spring to mind. I said to Citra, “it’s a shame we haven’t got Baldrick playing for us, at least we’d have a plan”. Citra’s reply was “yes but plans that involve parsnips rarely succeed”. He had a point, “so what about Graham Taylor or Sven Goran Erikson?” “Sadly Fuggles” he replied, “One is a turnip and the other a swede”. For fear of going through the entire East Anglian root crop industry let’s just say we got beet.

Time to go home, well for Citra it was, me and Mrs Fuggles were making our way down to south-east Cornwall for a week’s holiday, which means I miss the Brackley Saints game. Am I disappointed after today, just a bit? Why did I allow myself to believe we could get into the play offs, the maths suggested we could the footy suggested otherwise.  Our journey across the Devon and Cornish countryside would have been fairly picturesque but for the bleak darkness. However, there were a couple of interesting moments, the first was when we were winding our way up a hill when we came across a procession of Morris dancers on bikes. It was easier to hear them than see them as they were all wearing bell garters. Where the hell they were going is beyond me as there wasn’t a chink of light anywhere. The second occurred as we approached Okehampton, suddenly coming towards us was flashing lights and for goodness what else, a bloody rickshaw. We were in Devon not downtown Guangzhou or Delhi, the rickshaw was surrounded by police cars, support team and about 4 miles of traffic queues. This was the Rickshaw Challenge, the challenge having nothing to do with the rickshaw, the challenge was for the drivers and passengers in the 4 mile jam not to deliver any more than 70 expletives whilst travelling at 2 miles an hour for god knows how long. Good luck to them.
Cornwall can’t wait for a pint of bloody Doombar.