It was just after 4:30pm when Parker and Citra arrived to pick Fuggles up for very rare Friday night match. The FA Trophy is with us again and this season; just as we did 2 seasons back, we are playing St Ives, although this time away from home. Pharp is once again making his own lonely odour ridden way there. By 5:15pm we had parked up and were thrashing out a hasty pace. Crossing over Market Hill, looking to our right was a reminder of our first pub of the evening, the Oliver Cromwell. Ollie was sort of pointing the way and he wasn’t in a fine mess, no thanks to Stanley.

The Oliver Cromwell was very busy, bustling in fact with what looked like a mature clientele just popping in for a pint or three on their way home from a day at the office. A good selection of ales including Oakham Ales JHB and Green Devil IPA, Adnams Bitter and Ghost Ship, Hobgoblin and of course bloody Doombar. Parker went for the Adnams bitter whilst Citra and I had JHB. The Adnams was on at £2.50 a pint or at least that’s what the sign read, the lack of much change out of a tenner suggested otherwise, however, as it was ‘happy 2 hours’ and we were given 3 x 50p tokens off our next round. The ale was looking very good, very clear, always a popular pint is Adnams Southwold Bitter to give it’s full name, coming in at 3.7% a good session ale. The JHB, well what can I say about this champion ale, it’s pale, it’s zesty, it’s in good condition and always goes down well as do most Oakham’s ales, 3.8% Jeffrey Hudson; Bitter to once again give it’s full name is one of the best session ales around. Jeffrey was a famous little chap from the 17th century, Think Rutland think Jeffrey_Hudson. "Multum in parvo" ("Much in little"). We had another JHB, well we had to spend the 50p tokens, and got some more. Doh!. 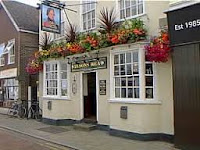 We moved on to the Nelsons Head, just a 5 minute walk, along the riverside. There was quite a few houses and luxury flats overlooking the river, oozing (or should that be Ouse-ing?) charm. A couple of nice boats moored up, we’ll probably see the owner of one of these in the pub at some point. He’ll be dressed in all the regalia, check shirt including anchor motif, with a navy blue jumper draped over his shoulders wearing pristine white slacks and sunglasses perched on the top of his head. We walked passed the West End DIY store, nothing of great note I hear you say.  Well maybe not, however, Marshall used to work for this DIY chain. We were a tad pleased he wasn’t with us otherwise he would have gone on about Walpamur whitewash paint, Anaglypta wallpaper and the virtues of LAP cold water paste all bloody night, small blessings. The Nelsons Head was also packed with the same sort of clientele, thrashing a couple down before going home. Hallowe’en was in evidence, either that or the spiders had been very busy the night before and the staff hadn’t had time to get the feather duster out. This is a Greene King pub but with a few guest ales also available. 8 hand-pumps serving 3 from GK, including IPA, Abbott and an interesting Black IPA, Hobgoblin again, Morlands Old Golden Hen and a couple from the Nene Valley Brewery, their bitter NVB and Simple Pleasures. The eighth pump was serving one of Cromwell’s ciders, local stuff. Citra and I went for Simple Pleasures, delightful pale ale, very tasty and as you might expect very citrusy. Coming in at 3.6% and in excellent condition, good loose head all the way down. Citra had another one of these whilst Fuggles tried the Old Golden Hen, had a few out of a bottle but never on tap, what a disappointment. Hardly any flavour at all, or had the Simple Pleasures overwhelmed my taste buds? No, gulp after gulp, it didn’t get much better, there was nothing wrong with the condition, it was in good nick, it just lacked any real character for me. Parker enjoyed is coffee. The Poppies media team had now entered the bar, and asked “did you know kick off was 8:00pm” No we didn’t, sounds like an extra pre-match pint. Next port of call on this mini pub crawl was the Royal Oak, not very far away on a parallel street with a single row of shops separating the two streets. We walked passed a chippy restaurant, it looked very busy, went around the end of the street did almost 180 degrees and started down towards our destination, this is when Citra had one of his moments. “There are a lot of chippies around here” he chirped. Parker and I looked at each other, and almost in perfect harmony we said” You daft bugger Citra it’s the same chippy”. Citra looked back and scratched his head, in a Stanley Laurel sort of way. 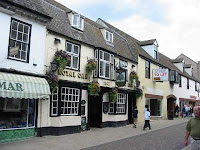 The Royal Oak looked like a good old traditional pub, we entered into the first small bar cum snug, and it would seem that the spiders had been even busier in here; although their webs were a strangely purplish colour, all that blackcurrant juice they’ve been on. With 6 hand-pumps mounted on the bar with some lovely ales on tap . 3 x Oakham ales, yippee! Dreamcatcher a whacking 6.9% red ale, Hawse Buckler 5.6% porter cum stout and Inferno, plus Wells Bombardier, Bloody Doombar and as it’s Hallowe’en Hobgoblin was on at the third pub out of three we’d been to so far this evening. Wychwood must brew an enormous amount of Hobgoblin at this time of year even though it’s available all year round. Needless to say Citra and I went for the Inferno, refreshing 4.0% golden ale, fruity, dry, and bitter, very much a typical Oakham ale. The ale was in very good condition, clear and clinging. Parker nipped out to the cash machine, so we sneaked another half-pint of Inferno. Parker clearly doesn’t realise we  know he’s sneaking out for a swift drag on a fag, always going back to the car to fetch something and a no doubt have a suck on a glowing weed, at least he’s not vaping! St Ives is a very nice place to have a few ales we could easily spend the night here thrashing a few more down, but we have a match to go to.
The match, why didn’t we stay in the pub? Well we won a very scrappy game, the pop fuelled Westwood Kop ‘Darby and Jones branch, were in good voice. There was a tune about one of our players wearing pineapple on his head, not sure about that one. They clearly enjoyed giving Dubi a bit of stick and taking the piss about our lack of ground, but it was all done in good spirits. That wasn’t a Hallowe’en pun. The game was over and so we moved onto Huntingdon, just a few miles down the road. We were lucky to get parked up directly outside the Falcon. Always a very busy pub and so it was as you would expect on a Friday night. 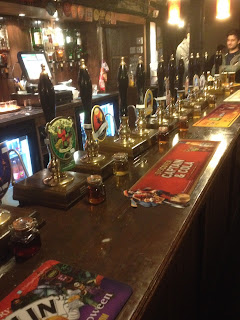 With 15 ales to choose from it’s difficult to make an instant choice. It’s also very difficult to list them all. Once again Wychwood Hobgoblin was available; however, this was the golden version along with Dirty Tackle. Not long now before we lose the Rugby World Cup themed ales. There was a couple from Potbelly one of which was Pig’s Do Fly, the Poppies won the Conference North drinking barrel after barrel of this stuff always a favourite. Also on tap were Downton’s Pumpkin Ale, Phipps’s Steamroller, Julian Church More Tea Vicar, Marston’s Empire and Nobby’s Biggus Dickus, plus a couple more including one from Great Oakley. Fuggles went for Biggus Dickus, 4.2% golden ale with plenty of hops, in perfect condition, very clear with a clinging head. Citra was singing the praises of Hobgoblin Gold earlier last week so it was inevitable that is what he’d drink. 4.2% golden refreshing and citrusy and in very good condition. Pharp had now arrived along with the Weebles, Petit Chemise, Marshall and Betweenthesticks. Pharp had Dirty Tackle, not surprised there, dark amber 4.0%. Downton Pumpkin Ale was the choice for Chemise and BWT, can’t remember what Marshall had. The Pumpkin was almost the colour of a pumpkin with an orange tinge, very hoppy at 4.2%. All the ales were in good nick. We had a few more before we trudged home leaving at around 11:25pm and arriving back in god’s chosen town around midnight.