THE SAINTS GO TRUDGING OUT

It’s just a short trip for the PRATS to Brackley, no more than a 45 minute drive from God’s chosen town, yet, Citra is en route at just after 2:00pm, he’s going to the usual pick up point The Britannia in Northampton  by bus. Catching the X4 to the county town centre then jumping on a local service out to Brackmills arriving in good time around 3:40pm Citra had arrived earlier than planned. The usual ales are on tap with the exception of Tribute, this has been replaced by yet another World Cup Rugby themed ale Greene King Scrum Down. An auburn IPA at 4.2%, pleasant enough and in good condition but pricey at £3.70 a pint. Citra decided to make this last until it was time for Parker to arrive at just after 5:00pm.

It was around this time when the Fuggles started out on their epic Cawsand/Kingsand pub crawl, with the first port of call just 70 metres away from our holiday cottage. The Cross Keys sits on The Square in Cawsand village, a pebble’s throw away from the beach. A fairly typical Cornish pub, slate floors, wood everywhere with the walls adorned with all things coastal, images of Rame gigs throughout the bar area. The regulars are already in there after a busy day reading a book or walking the dog, a few workers come in for their usual after work guzzle. The pub has 4 hand-pumps; but at this time of year just 2 ales and a cider are available. Fuggles starts with Dartmoor Best, it was in very good condition, very clear with a good loose head. However, it was a tad cold, nevertheless quite refreshing amber ale coming in at 3.7%, nice and bitter with a hint of toffee, could be a good session ale, this is definitely one for both Parker and Pharp. Next up was Dartmoor Legend at 4.4% this is a rich; full flavoured dark golden ale, fruity, malty nicely balanced. Once again the ale is in good condition but colder than perhaps it should be, yet easily drinkable. And so on to the next pub….

Parker and Citra made their way to Brackley arriving around 5:30pm, during the journey the main topic of conversation had been the goings on over the past few days in the world of KTFC. Parking up in the Market Square, the Plough was the destination. The pub looks small from the outside but TARDIS like, once inside it becomes quite large. A pleasant hostelry with Bloody Doombar and Tribute on offer, Parker would be pleased and duly went for Gloombar. Fortunately for Citra; there was another ale on tap, Vale Breweries GMT, on the pump clip it proclaims this ale is a ’London Style hoppy bitter’, what’s one of them? At 4.3% it was pleasant enough but not Citra’s preferred style whether it be a London style or otherwise. 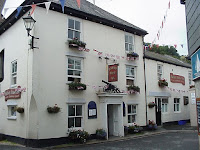 The Fuggles were now climbing a short hill towards the next pub just 300 metres away, at the top of the climb were good views across Plymouth Sound, although getting dark by now you could clearly see the outline of large; well-lit ships; making their way to and from Plymouth docks. We trudged down a longish slope to the Halfway House pub. We had now just crossed the old county boundary from Cornwall into Devon, well we would have done until 1844 when the boundaries changed, hence the name of the pub, originally partly in Cornwall, partly in Devon. This pub has been refurbished over the past year or so and is now a smart restaurant/pub. White paint with duck egg blue trim abounds. All the tables have scrubbed bare wood surfaces with everything below painted white. Chairs were also painted white as was the bar; a large central fire was warming the place up nicely. Four hand-pumps and yes, you’ve guessed it Bloody Doombar and Tribute, just like the Plough in Brackley some 230 miles away, however, Halfway  also have Sharp’s Atlantic IPA, so this is what Fuggles went for. This is a tasty, light golden ale, very hoppy coming in at 4.2%, in very good condition. 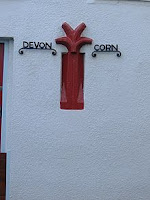 A delightfully refreshing IPA, very clear with a loose head clinging all the way down the glass. The landlord here is always going on about the virtues of Tribute so I had one, well it’s only brewed 36 miles away in St Austell so it counts as a local beer around these parts. Having said that Sharp’s brewery is only 45 miles away, so relatively local. Tribute is quite a pleasant ale and is always very drinkable, pale amber, 4.2% hoppy yet slightly sweet as well. Once again it’s in excellent condition, lovely. The Fuggles will be back here before the week is out as they have a selection of 9 cheeses to choose from on the cheeseboard all from Cornwall.


Parker and Citra took a slow stroll down to the Red Lion, a Charlie Wells pub, hoping for a guest ale on top of the usual CW stuff, maybe something from Youngs. Sadly nothing of any special merit, Eagle bitter, Bombardier and Courage Directors . Parker went for a coke, whilst Citra tried the Eagle. The first sip sent Michael Jackson like spasms throughout his frame, the second sip generated another spasm, a third sip and Citra was now rippling in perfect descant harmony.  Jack Douglas would have been impressed.  Needless to say, Citra didn’t finish it, glad I wasn’t there with them.

The Fuggles now took a short 150 metre stroll to the Devonport Inn, passing the famous Kingsand clock tower, sitting right on the sea front over-looking Plymouth Sound. This is very much a bistro type pub, with food being the dominant feature here. Once again recently refurbished after being battered during the February 2014 storms.  Three hand-pumps, Sharp’s Atlantic IPA, Bays Brewery Autumn Ale and Rebel Brewing Sail Ale.  Fuggles went for the Sail Ale, a lovely straw coloured ale, zesty with a citrusy finish coming in at 4.0%. This was quickly followed by the Autumn Ale, completely different taste, russet colour, dry malty and sweet. A good premium ale at 4.4%, lots of flavours, very nice. Both ales were in good condition, perfect. One more pub to go…………….

With the disappointment of the Red Lion still reverberating through Citra, it was time to go to the ground. Arriving quite early meeting Mr and Mrs Sadman who had just driven up from Padstow, daft sods. The game was played mostly with the Poppies U21’s with a few old farts making up the numbers. The Poppies were triumphant moving into the semi-final of the county cup, glory days are here again.

For the Fuggles the walk to the next pub would be challenging, a very very steep hill was between us and the Rising Sun only 150 metres away. So steep is this hill at times you’re not moving forward, just treading up and down on the same spot. Thankfully there’s a wall outside the pub, we could sit here for a few minutes to gather our breath. If we’d gone into the pub we couldn’t have asked for anything. Once inside we were greeted by a simple pub, clearly the village local and three hand-pumps, once again Sharp’s Atlantic IPA, Rebel Brewing Malty National and Skinners Brewery Heligan Honey. The latter is a lovely ale so I went for one of these, I also ordered Chicken Jalfrezi whilst Mrs Fuggles had her favourite Lambs Liver with an onion mash. Heligan Honey is a lovely refreshing pale amber bitter, coming in at 4.0% , hoppy with a hint of honey, just right for a curry. The jalfrezi was bloody hot and spicey, I was dreading the next morning, It’s a good job I had a decent pint to help it down, in fact I had to have another and it was in good condition. That was it for the night, our walk home was mostly downhill with just an occasional rise.

Pharp had now joined Parker and Citra and they were on their way to the Towcester Mill brewery tap
.At last, a chance for a decent pint. All the usual beers were on, Parker and Pharp went for their usual Bell Ringer whilst Citra went for his usual Mill Race. As usual all the beers were in superb condition. Unfortunately they only had time for one before closing time.