This week we travel just about as far as you possibly can and still remain in the county. Brackley Town Saints in the Hillier Cup, this competition rarely encourages supporters to make the journey, but the PRATS will be there although not Fuggles. No I’m down in Cornwall this week so Citra, Parker and Pharp will be doing all the ale guzzling, well Citra actually as the other two will be driving.  There are a few pubs in Brackley town centre; 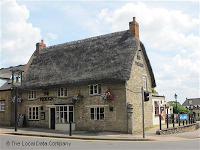 The Plough isn’t a bad place to start, although parking near the pub is near impossible. So parking in the Market Square and walking is probably the best thing to do. The Plough has several ales on including Bloody Doombar but on the occasions I’ve frequented this boozer either Cherwell or Vale ales have been available. Just down the road in the square is the Charlie Wells pub the Red Lion.

The food is good here and they usually have at least one guest ale on tap.  Across the road is the Crown Hotel and closer to the ground further down the road you’ll find the Loco Inn, they usually have Hook Norton in here but just a single hand-pump. The ground is only a short walk from the town centre, so parking up here and walking back into town could be a good option. Will we put out the first team or the U21’s, is there a difference as most of them have had first team experience?

On the way home, well there’s only one place to go really. How can you possibly go past Towcester without popping into the Towcester Mill Brewery Tap  but note, it closes at 10:30pm so pray for no penalty shoot-out.

The Fuggles will be having a few beers in the twin villages of Cawsands and Kingsands which is on the ‘The Forgotten Corner’ Rame Peninsula sitting on the coast of Plymouth Sound. Four pubs so we might as well have a crawl, we should have around 10 different ales to choose from and with a total walking time of 15 minutes, door to door including all 4 pubs, marvellous.