YOU SAY TO MERTHYR, I SAY TO MARTYRS

This weekend the PRATS travel out of the country and into the land where leeks and daffodils have some importance. A land where you will find a 14.7586mm square masonry drill bit, a rare bit indeed. Look you, we’re on our way to Merthyr Tydfil or as the local’s spell it Merthyr Tudful, I’m glad they put the both spellings on the road sign, we wouldn’t want to go to the wrong Merthyr.
We were down here in May for the championship trophy, one of those competitions that nobody really cares about, as Max Boyce would say “I know because I was there”. We lost 1-0, that long day back in May, but at least we found some good pubs and are looking forward to returning to them.

On the way there we’ll stop a few miles before Merthyr and go to the Bridge Inn at Llanfoist, a very nice friendly pub sitting by the River Usk. We were made very welcome here before. 4 ales including their regular Hancock HB, there’s usually Wye Valley ale on as well.
There next stop along the Heads of the Valley road will be Merthyr itself. Merthyr’s ground at Penydarren Park is only a stone’s through from the town centre, but if you want to go and fetch that stone you’ll have a decent trudge. Once in the centre there are a couple of pubs worth visiting. Wetherspoons Dic Penderyn is fairly typical; but this pub must have had both positive and negative effects on the local boozing landscape. There aren’t many pubs open, the Imperial Hotel doesn’t open till 4:0pm, why so late for a Saturday? 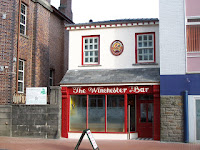 The surrounding area by the spoons pubs has been tidied up quite a bit whilst other areas look run down, quite a few boarded up shops. Just along the road by the Castle Hotel is the Winchester bar, this is owned by the Rhymney Brewery with 4 of their ales available. Even back in May the open fire was like a window into Dante’s inferno, the raging red ‘magma’ glow was incredibly hot. No one sat anywhere near the fire it was so hot, so imagine what it’s going to be like this Saturday on a cold November lunchtime.

There weren’t any decent ale at the ground last May so we’re not expecting anything this time round although they do have some half-decent bottled ale. On the way home we have a couple of choices, do we go back to the wonderful Coach and Horses Inn at Weatheroak, we called in here on the way home from our Paulton Rovers trip. Or do we stop earlier close to Ross on Wye? The White Lion in the near-by village of Wilton just off the A40 looks interesting serving Wye Valley ales.